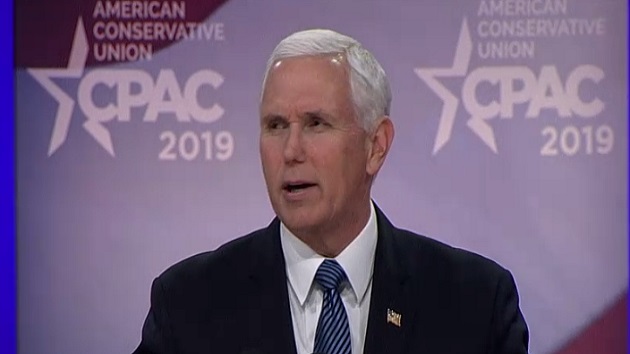 ABC News(NATIONAL HARBOR, Maryland) — Once a home for conservatives whose beliefs occupied the fringes of the Republican Party, the 2019 Conservative Political Action Conference has been transformed into something of a pep rally for President Trump's presidency — driven in large part by a Republican establishment that has embraced the president's base and redefining what could be considered the party's mainstream.
Organizers estimated a crowd of 10,000 at what Vice President Mike Pence called "the largest gathering of conservatives anywhere in America." Many reserved their loudest cheers and longest ovations for the president's closest aides and allies, in a scene that would have been unimaginable in past years, when the convention was home turf for the same Tea Partiers battling party establishment up the river in Washington.
A speech by Trump will be the main event Saturday morning, but in the two days preceding, CPAC was visited by Pence, five different cabinet secretaries, several top White House advisers, and a number of Trump's closest Capitol Hill allies, including Sens. Lindsey Graham, R-S.C., David Perdue, R-Ga., and Ted Cruz, R-Texas.
The establishment-CPAC divide has been bridged, in part, by a president who himself emerged from those same party fringes and pitched voters as the outsider candidate.
Attendee Harold Hauber, 60, a retired Naval officer from Jacksonville, Florida, said that he thought Trump's everyman style smoothed the waters between the White House and those in the CPAC crowd.
"He says the words the way common folk would say them. He doesn't sugarcoat things. He says it like it is. You know where he's coming from," Hauber said, adding that it helped to put politics "back in perspective."
Part of that perspective, as described by speakers throughout the conference's first two days, included the dire straits they argued the U.S. would find itself in should a Democrat — and worse, a Democratic-socialist — defeat Trump in the 2020 election. The message was hardly a surprise, given one notable first for the 2019 event: the Republican National Committee's formal sponsorship.
Late last year it was revealed that the RNC and Trump's team would join together in an unprecedented marriage between a party and presidential campaign in a joint fundraising committee known as Trump Victory, a move characterized by critics as one intended to shield the controversial president from a primary challenge. The party further passed a pledge of support for Trump at its winter meeting in January, and some state party leaders have openly mused about cancelling their primaries and caucuses.
When taken together, the actions appear to be the sort of gatekeeping to cut against the grain of CPAC's outsider history, but in the service of Trump, it has been welcomed.
When the prospect of a primary challenge spearheaded by Maryland Gov. Larry Hogan — who has been openly critical of the RNC's Trump-related maneuvering — or former Ohio Gov. John Kasich was raised to RNC chair Ronna McDaniel during her appearance Thursday, the crowd hissed their disapproval.
At CPAC's exhibit hall, the Trump Victory booth, selling Trump T-shirts and "Make America Great Again" hats, was the most popular in the middle of the day Friday, complete with conference attendees posing for pictures behind a lectern styled in the fashion of that in the White House briefing room. The display is a stark contrast from the signs that sit at the threshold of the area hosting the convention, claiming that "CPAC is an educational event" and "electioneering is strictly prohibited."
For her part, McDaniel did not rule out the prospect of Trump having to defend his place on the 2020 ticket, but was far from neutral in her stance.
"They have the right to jump in and lose," she said.
She further questioned why the governors or any other Republican would be interested in running against a president whose success, she says, so many in the GOP, including at CPAC, were celebrating.
"That's fine, they'll lose horribly." McDaniel continued. "So have at it."