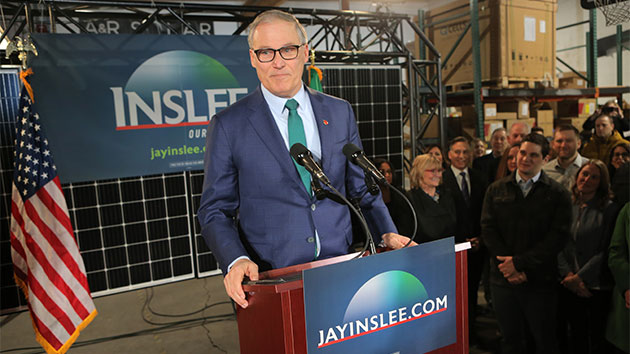 Karen Ducey/Getty Images(ST. LOUIS) — The candidates who have decided to take on President Donald Trump in 2020 already have created one of the most crowded primary fields to date.

Of the major Democratic candidates who've declared for the White House so far, more than half are senators, two are former or current U.S. representatives, one is a former cabinet secretary and one is a mayor.

Inslee got a feel for the presidential campaign trail before he announced by paying visits to every early-primary state except South Carolina. During these visits, the two-term governor pledged to make climate change his central focus.

"I've been pleased by what I've been hearing across the country, that people do want a president that will act on a real emergency, which is climate change," Inslee said in an interview on CBS News' "Face the Nation" last week.

Inslee has been outspoken about his desire to see a climate-centric candidate for more than a year. He told Politico in 2018 that the Democratic party needed to "produce a nominee" for president "who's going to really be committed to defeating climate change and creating a clean energy economic message."

The governor does not share the same name-recognition as many of his fellow 2020 hopefuls, but he isn't concerned. He told The Seattle Times in December that former Presidents Jimmy Carter and Bill Clinton were "pretty much unknown governors of small states" before they ran for the nation's highest office.

Inslee's sharp criticism of President Donald Trump and his administration has helped him raise his profile. He's called the president a "bully" and "out of touch," criticizing his views on other hot-button issues including health care, gun control and immigration.

Perhaps most notably, in 2017, Inslee supported the state of Washington's court action against the president's travel ban. A year later, he confronted Trump face-to-face during a meeting on gun and school safety at the White House. In response to Trump's proposal on arming teachers after the high school shooting in Parkland, Florida, the governor said, "I think we need a little less tweeting here, and a little more listening."

Here's everything you need to know about 2020's "Climate Candidate:"

Early life: Inslee is a fifth-generation Washingtonian who grew up in Seattle. His father was a high school teacher and coach, and his mother worked at a department store as a sales clerk. He worked his way through the University of Washington, where he earned a degree in economics before attending law school at Willamette University in Salem, Oregon.

What he used to do: After graduating from law school, he worked as a city prosecutor in Selah, Washington, for 10 years. In 1985, Inslee became involved in public service and helped build a high school. This project motivated him to fight budget cuts that were facing rural schools in the area, and in 1988 he was elected to the Washington House of Representatives, where he served two terms.

Four years later, he was elected to represent Washington's 4th Congressional District in the U.S. House of Representatives. In 1994, he lost his bid for re-election.

In 1996, Inslee made another failed bid, but this time for governor. After he lost in the primary, former President Bill Clinton chose him to serve as regional director for the U.S. Department of Health and Human Services.

In 1998, Inslee made his way back to Capitol Hill, representing Washington's 1st Congressional District. He served on the U.S. House Committee on Energy and Commerce and was re-elected to congress six times before winning the 2012 governor's race back in his home state.

During the 2018 election cycle, he served as chair of the Democratic Governors Association.

Environmental efforts: Inslee was referred to as "one of Congress's most ardent advocates of strong action to combat global warming." He was a major proponent of the proposed cap-and-trade system and advocated for legislation that protected national parks.

In 2002, he published an op-ed detailing a "new Apollo project," a program that would combat climate change through clean energy and job creation.

A year before he left Congress, Inslee accused Republicans of "having an allergy to science and scientists" during a hearing on the effects of greenhouse gas emissions.

As governor, he's invested more than $76 million into clean energy projects, implemented a Clean Air Rule to cap carbon emissions and co-founded a coalition of 17 governors who have pledged to work to "uphold U.S. goals under the Paris agreement on climate change."

Last year, he attempted to pass the nation's first tax on carbon dioxide.

On the Green New Deal: The Green New Deal, championed by freshman Rep. Alexandria Ocasio-Cortez, has brought environmental issues to the forefront. Many 2020 candidates are being pressed on their opinions of the plan. Inslee told The Guardian and later wrote on Facebook: "The Green New Deal is exciting. It raises ambitions and alerts people to the scale of the problem, the scope of it. This wouldn't be a one-note candidacy; it touches on everything from national security to asthma."

What you may not know about him:

He writes and illustrates books for his three grandchildren. Inslee met his wife, Trudi Inslee, in high school. They've been married since 1972. Before attending the University of Washington, Inslee dropped out of Stanford University because he was unable to obtain a scholarship. He's friends with former Vice President and fellow climate change activist Al Gore. The two met in the 1990s. Gore told The Atlantic, he's "eager to see Inslee's candidacy." He was one of the few Democrats who chose to run televised advertisements during the 1998 election cycle against the impeachment of President Bill Clinton. While in Congress, his net worth ranked 302nd in the House of Representatives, according to OpenSecrets. He has said he supports getting rid of the filibuster if elected president.

Phylicia Rashad and Jay Ellis explain why joining the sci-fi horror ‘Black Box’ was an obvious “yes” for them
Jay Ellis says he was “shocked as everyone else” with the season four finale of ‘Insecure’
Inslee, Merkley criticize Trump for suggesting forest management to blame for wildfires
Two men indicted for the 2002 murder of Run DMC’s Jam Master Jay
Trump’s message to ‘liberate’ states dangerous: Washington Gov. Jay Inslee
Reopening ‘quite a ways away,’ but mitigation efforts working: Washington Gov. Inslee