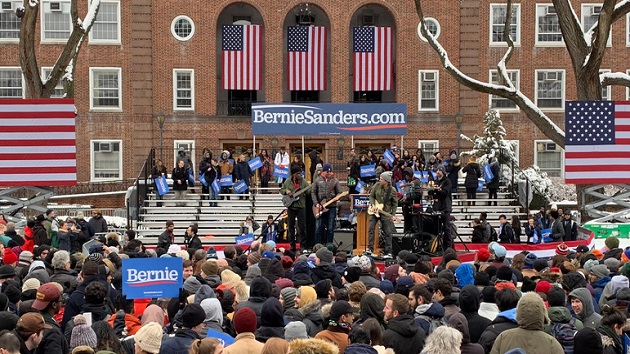 @GarciaReports/Twitter(NEW YORK) — Bernie Sanders kicked off his 2020 campaign on Saturday in Brooklyn, doubling down on his progressive agenda and maintaining his position staunchly to the left of a crowded field of Democratic nominees in his second bid for the U.S. presidency.

Thousands of hardcore supporters braved a winter snowstorm to hear the 77-year old former New Yorker delve into his own family's middle class background and detail his plans "to defeat Donald Trump, the most dangerous president in modern American history," and "create an economy and government which works for all Americans, and not just the 1 percent."

"The principles of our government will be based on justice: economic justice, social justice, racial justice and environmental justice," the Vermont senator told the cheering crowd at Brooklyn College, which he attended for a year. "I want to welcome you to a campaign which tells the powerful special interests who control so much of our economic and political life that we will no longer tolerate the greed of corporate America and the billionaire class — greed which has resulted in this country having more income and wealth inequality than any other major country on earth."

Meanwhile, Trump spoke simultaneously to a friendly crowd at the annual Conservative Political Action Conference in Baltimore, in his first public appearance after the failed summit with North Korean leader Kim Jung Un in Hanoi this week.

Back in Brooklyn, Sanders spoke about his family’s immigration story, expanding on his Jewish family's escape from eastern Europe.

“My father came to this country from Poland at the age of 17, without a nickel in his pocket. Without knowing one word of English. He came to escape the crushing poverty that existed in his community, and to escape widespread anti-Semitism," Sanders said, adding that after his father immigrated to the U.S., "virtually his entire family there was wiped out by Nazi barbarism.”

Sanders spoke about growing up lower middle class, in contrast to Trump.

"I did not come from a family of privilege that prepared me to entertain people on television by telling workers: 'You’re fired.' I came from a family who knew all too well the frightening power employers can have over everyday workers,” Sanders said.

Sanders also gave an outline of his agenda: to push for single-payer Medicare for all, create jobs with infrastructure projects and, among other goals, fight climate change.

He also promised to lower student debt, a 2016 campaign issue that appealed widely with younger voters, and to "develop a humane border policy for those who seek asylum."

"No more snatching babies from the arms of their mothers," Sanders said.

Armored with snow boots and hats while clutching coffee and signs like "Hindsight is 2020," Sanders stalwarts lined the surrounding blocks hours ahead of the event, while a reggae band played live.

"He’s fighting against the billionaire class. I think we need a revolution of working people to take power back from the financial oligarchy that is really running this country right now," supporter Alan Akrivos told ABC News, adding that he liked that Sanders' campaign did not take money from corporations or big oil companies.

As in 2016, Sanders says he'll run a grassroots campaign. His supporters donated $6 million within 24 hours of his 2020 campaign announcement.

On Sunday, Sanders' schedule includes the Martin and Coretta King Unity Breakfast in Selma, Alabama, which will honor Hilary Clinton, who is expected to attend. The event will commemorate the "Bloody Sunday" civil rights march, in which activists were beaten and tear-gassed by police.

Sen. Sherrod Brown and former U.S. Secretary of the U.S. Department of Housing and Urban Development Julian Castro, both of whom have also announced their bids for the 2020 Democratic party's nomination, are scheduled to attend.

Sanders' 2020 campaign has not launched without baggage. He's still a flashpoint for some liberals who blame his leftist platform for taking voters away from Clinton.

He also had to address accusations from women who worked on his 2016 campaign and said they were sexually harassed or mistreated; Sanders issued an apology in January before announcing his presidential campaign in mid-February.

"The allegations that I have heard, that you have heard, speak to unacceptable behavior that must not be tolerated in any campaign, or in any workplace in our country. To the women in our campaign who were harassed or mistreated, I apologize," Sanders said during a news conference on Capitol Hill. "Our standards, our procedures, out safeguards were clearly inadequate."