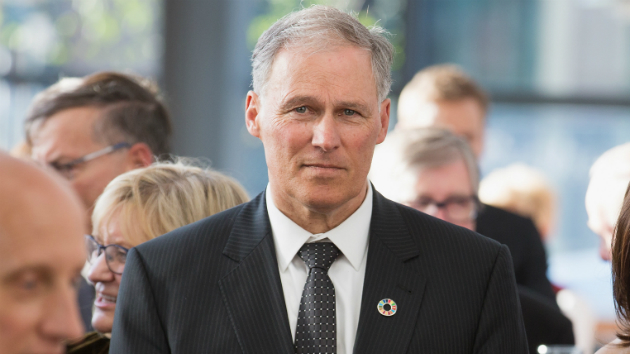 Inslee, who also represented Washington in Congress for more than 20 years, is the first governor to officially enter the 2020 race.

"We went to the moon, and created technologies that have changed the world," Inslee said in his announcement video posted Friday. "Our country's next mission must be to rise up to the most urgent challenge of our time: defeating climate change."

Standing before a crowd of a few hundred supporters Friday morning at a solar energy company just south of downtown Seattle, Inslee officially announced that he has joined the Democratic race for president.

"I am announcing today that I am a candidate for President of the United States," Inslee told the crowd at A&R Solar.

Inslee is making combatting climate change the singular issue of his campaign, hoping his focus on the issue will propel him from a little-known governor to a top-tier Democratic contender in an already crowded race.

"This is the 11th hour to defeat climate change," he added.

The governor connected the issue of climate change to every other major policy challenge facing the United States, calling it a matter of national security, and a way to rebuild the American economy and help lift communities of color out of poverty.

"If given this high honor I will make fighting climate change the number one priority of the United States of America," Inslee said.

Inslee also ticked off the policy priorities that he has focused on as governor, including expanding green jobs in Washington State, passing education reforms that expanded access to early childhood education, and raising the minimum wage.

He also called on the United States to legalize marijuana nationwide, something voters in Washington State passed in 2012.

"If America wants to see a Washington that works, look west to Washington State," Inslee told the crowd.

Inslee also laid out his strategy for breaking through in a crowded Democratic field, and what he believes is the best way to counter-message against President Donald Trump.

Inslee said that his state is prepared to sue Trump over his national emergency declaration at the U.S.-Mexico border, and that he relishes the chance to go one-on-one with him if he wins the nomination.

"I can think of no higher pleasure than to take on Donald Trump on a big stage. I’ve done it in White House. I’m the governor who went to the White House and told him he needed to quit tweeting and start listening to Americans. I feel very comfortable in that confrontation," Inslee told ABC News in an interview following his campaign launch, "I’m happy that I was the first governor to call him out on his Muslim ban. We’ve sued him successfully now something like 16 times, and we’ll do it again on his emergency action on his vanity project on the wall, at the right moment."

In a brief press gaggle with reporters after his announcement, Inslee called on Republicans in Congress to block Trump's national emergency declaration, saying his state may sue if the White House attempts to use funds appropriated to Washington State.

"It is my hope that Republicans will stand up on their hind legs and finally honor the U.S. Constitution, rather than their oath to Donald Trump. If that happens we will stop it. If that does not happen, and he takes one dollar out of Washington, we will sue him to stop this illegal act," Inslee told reporters.

Inslee was also asked if he would commit to declaring a national emergency over climate change if elected to office, considering he has called Trump's declaration "illegal," and "unconstitutional."

"Under the existing circumstances I would not commit to declaration — a declaration of a national emergency today," Inslee said, "The reason is, the best way to do this is to work with Congress to develop a national consensus about how to build a clean energy economy."

When asked by ABC News why he would make a good figurehead for a Democratic Party that is getting younger and more diverse, Inslee again pivoted to his singular issue — climate change.

Despite his optimism, the Washington governor remains relatively known nationally but says that's a challenge he's faced before and overcome.

"We won a state basketball championship 50 years ago, and we were underdogs then, and I’m an underdog now, but I love winning, and we got a good chance to do just that," Inslee said.

But the Seattle native, who's held elected office since 1989, is betting the growing threat of climate change will be a top-of-mind issue for Democratic voters.

"This is a moment. This is the 11th hour to defeat climate change. It is a moment of great urgency, but it is also this incredible opportunity to seize for job creation," Inslee said in an interview with ABC News last week at the National Governor's Association Winter Meeting in Washington, D.C.

"Mother Nature is making it break through, not me. Because Mother Nature, aggravated by climate change and carbon pollution, has burned down Paradise, California, drowned Houston, and is now drowning Miami Beach," Inslee added. "This wake-up call is being delivered, and people are responding to it."

Inslee will officially kick off his campaign with an event Friday afternoon in Seattle at a solar energy company, touting his work as governor growing his state's clean energy industry.

The governor also will appear on ABC News' "This Week with George Stephanopolous," on Sunday, and will make his first trip to Iowa as a candidate on Tuesday, followed by campaign trips to Nevada and California later this month.