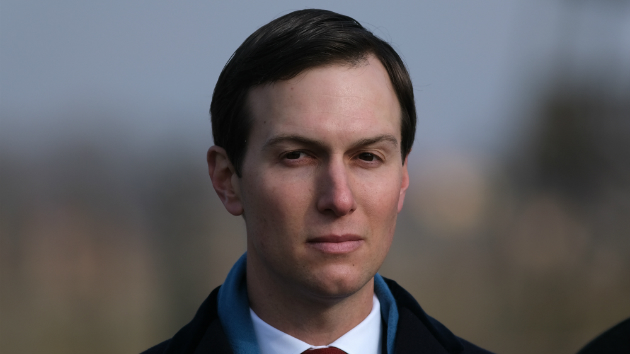 Sean Gallup/Getty Images(WASHINGTON) — The chairman of the House Oversight Committee says the White House has not been cooperative in a growing probe of security clearances given to members of the Trump Administration.

The accusation comes on the heels of a report in the New York Times Thursday, citing four sources who claim former chief of staff John Kelly said President Donald Trump ordered him to get a top-level security clearance for his son-in-law, Jared Kushner, approved.

ABC News has not independently confirmed the report which cites a memo written by Kelly.

Trump told the Times last month he "was never involved in his [Jared’s] security" clearance.

Earlier this month, in an exclusive interview with ABC News’ Abby Hunstman, Ivanka Trump said " the president had no involvement pertaining to my clearance or my husband's clearance, zero."
The House Oversight Committee recently announced its own security clearance investigation — including a review of Kushner’s clearance.

“The security clearance process is supposed to function in an even-handed and neutral manner based on the national security interests of the United States," Chairman Elijah Cummings said in a statement Thursday. "This latest report indicates that President Trump may have granted access to our most sensitive classified information to his son-in-law against the advice of career staff — directly contradicting the President’s public denials that he played any role."
The White House has faced mounting questions for months about issues with security clearances for dozens of administration officials who were operating under temporary clearances well into 2018. Two of the president's top aides, former White House staff secretary Rob Porter and personal aide John McEntee, departed the White House after flags were raised in their respective clearances.
“It is highly usual for the president to override security officials and instruct them to grant a security clearance to someone who has been deemed high risk,” said former Homeland Security official and current ABC News contributor John Cohen. “The security clearance process is one of the ways we protect our nation’s most sensitive secrets. And while the president has the authority to override the process, it doesn’t mean he should because it may place our national security at risk.”

Peter Mirijanian, spokesperson for Abbe Lowell, the attorney for Kushner, said in a statement, “In 2018, White House and security clearance officials affirmed that Mr. Kushner’s security clearance was handled in the regular process with no pressure from anyone. That was conveyed to the media at the time, and new stories, if accurate, do not change what was affirmed at the time.”