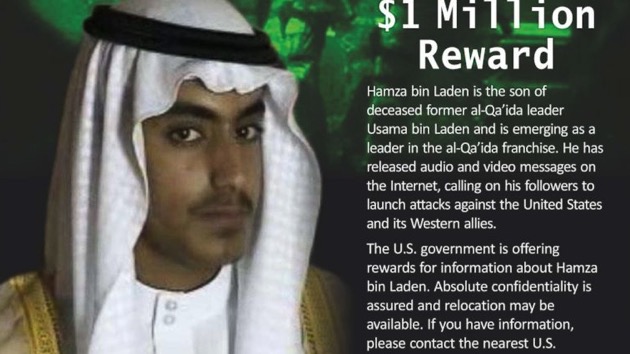 (Rewards for Justice/U.S. Department of State) The United States is offering a reward of up to $1 million for information on the whereabouts of Hamza bin Laden.
Posted on March 1, 2019 by ABC News

(Rewards for Justice/U.S. Department of State) The United States is offering a reward of up to $1 million for information on the whereabouts of Hamza bin Laden. (LONDON) — The United States will pay up to $1 million for help locating one of the sons of the late al-Qaida founder Osama bin Laden, who officials say is emerging as a "key leader" in the terror group.
The U.S. Department of State announced the offer Thursday for information on the whereabouts of Hamza bin Laden, whose father was killed by American forces at his hideout in northern Pakistan in May 2011.
"Since at least August 2015, he has released audio and video messages on the Internet calling on his followers to launch attacks against the United States and its Western allies, and he has threatened attacks against the United States in revenge for the May 2011 killing of his father by U.S. service members," a State Department spokesperson said in a statement Thursday.
Letters seized from Osama bin Laden's hideout after he was killed indicate he was grooming Hamza bin Laden to replace him as the leader of al-Qaida, which was responsible for the 9/11 attacks.

The younger bin Laden, who is believed to be between 30 and 33 years old, was born in Jeddah, Saudi Arabia. The Saudi kingdom announced Friday that it had revoked his citizenship.

Hamza bin Laden is married to the daughter of Mohamed Atta, one of the al Qaeda masterminds behind the 9/11 attacks who crashed the first hijacked airliner into the World Trade Center in New York City, according to the State Department. Nearly 3,000 people were killed in the attacks that day.
The United Nations Security Council added Hamza bin Laden to its sanctions list on Thursday. The U.S. Department of State named him a "specially designated global terrorist" in January 2017.
The State Department is urging anyone with information about him to contact its counter-terrorism rewards program, Rewards for Justice. All information will be kept strictly confidential and relocation may be available.
Copyright © 2019, ABC Radio. All rights reserved.