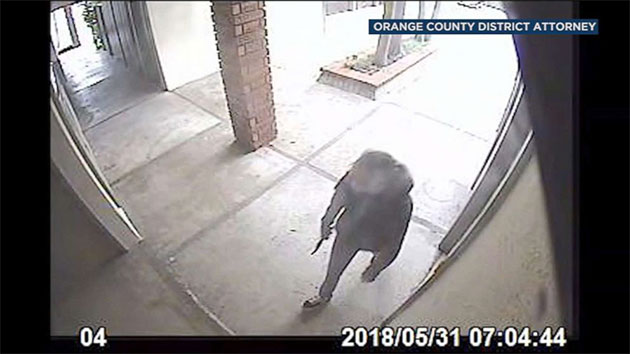 Orange County District Attorney's Office/Fullerton Police Department(FULLERTON, Calif.) — Newly released police body-camera footage from Fullerton, California, has captured the three minutes of sheer terror a panicked mental-health therapist experienced as she was being attacked with a knife by a former patient.

On Thursday, the Orange County District Attorney's Office announced that the officers who'd fatally shot the former patient — 46-year-old Katherine Ann Brazeau — acted lawfully and released its findings and body footage from the May 31, 2018 incident.

Brazeau was killed by Fullerton police after she stabbed her former therapist and tried to barricade the two of them inside the therapist's office.

"They (the officers) were clearly saving a victim that had already been stabbed so we close our inquiry," Orange County district attorney Todd Spitzer said Thursday during a news conference. "If they were to deploy into the room without using lethal force and the subject, Brazeau, had the knife, the officers would be subject to harm there."

Both officers — Sgt. Perry Thayer and Cpl. Steven Bailor — had opened fire on Brazeau with their service weapons, he said.

Bailor is a 22-year veteran with the police department and Thayer has 14 years with the force, the district attorney's office said.

This treatment occurred between 2015 and 2018, when, at some point, the therapist decided she could no longer treat Brazeau. When she told Brazeau, the letter said, Brazeau "made comments about knowing where Therapist Doe lived and threatened to harm herself" if treatment was ended.

On March 27, 2018, authorities said, the therapist got a temporary restraining order against Brazeau.

In April, the therapist was granted a permanent restraining order. On May 31, around 7:30 a.m., Brazeau arrived to the therapist's office building with a large hunting knife, Spitzer said.

Surveillance video outside the office captured Brazeau carrying a knife as she walked toward the building's entrance. According to the district attorney's office, the therapist told Brazeau to leave her office, alerting her that she was violating a restraining order, and Brazeau locked the door.

"Brazeau attacked Therapist Doe with the knife, stabbing her in the back, near her spine," the district attorney's office said.

As Brazeau started destroying the therapist's office, blocking the office door, the therapist was able to call 911. A patient who'd been waiting to be seen by the therapist also called 911, authorities said.

"911, what's your emergency?" the dispatcher can be heard saying.

"You can hear Ms. Brazeau ordering the therapist to hang up the phone and telling her 'You're not going to need it anymore' and she says these words, which are eerie, 'Because you're going to be f–in dead.' So she threatens the therapist. She’s stabbing the therapist," the district attorney said at the news conference.

Bodycam footage from Bailor and Thayer showed both men arriving and running to the building as other emergency vehicles approached the scene.

Bailor's bodycam showed Brazeau standing over a person in a chair with her hand holding the knife and her arm poised to strike. The officers opened fire, shooting Brazeau.

"Are you OK?" one of the officers can be heard asking the therapist after the shooting.

Spitzer said the autopsy confirmed that Brazeau had been shot seven times.

According to toxicology tests, she had several substances in her system including medications to treat panic and bipolar and manic behavior as well as marijuana, he said.

The therapist survived the attack.