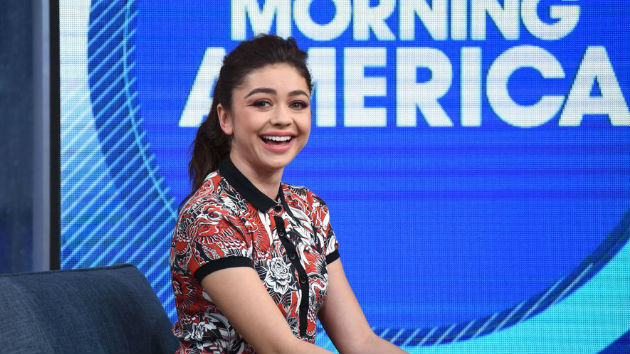 ABC/Paula Lobo(NEW YORK) — Fans know Sarah Hyland for her role on ABC's Modern Family, now in its 10th season, but the star has also been very open about her health struggles, which she says she's been able to deal with thanks to plenty of behind-the-scenes support.
The 28-year-old actress stopped by Good Morning America on Friday and opened about her health issues, following revelation last year that she's had 16 surgeries, including two kidney transplants.

The actress was born with kidney displasia; her father donated a kidney to her in 2012. But the following year, after her body began to reject the new kidney, she went under dialysis and another transplant, this time from her younger brother.
"You have to actively stay positive throughout things," says Hyland. "It can take a toll on your mental health and on your body, but as long as you surround yourself with the right people and stay positive…I'm good."
"Most of the surgeries that I had were before I was four, so at least that's kind of a distant memory," Hyland added. "Surrounding myself with my friends, this sisterhood that I have with these girls is amazing, and also dogs are the greatest thing ever to happen in the entire world."
Hyland said working on a comedic show like Modern Family has also helped to boost her spirits.
"The cast is amazing, the crew is amazing. We're in our 10th season now and most of our crew members have been with us since day one, so I've really grown up with these people," she explained. "They always can tell when I'm not feeling well."

"Even our props guy [will say], 'I'm here if you need anything.' They've been really amazing to me.'"
Modern Family airs on Wednesday nights on ABC.