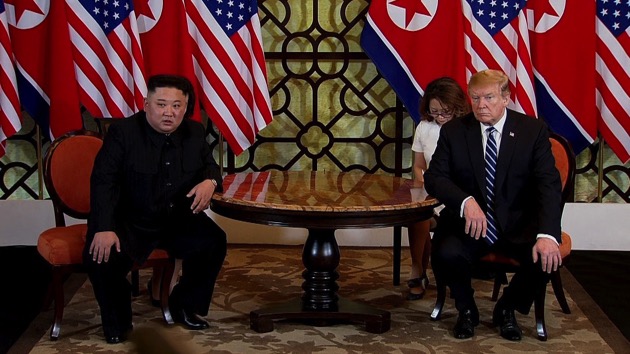 Vietnam News Agency/Handout/Getty Images(NEW YORK) — The parents of Otto Warmbier, the 22-year-old student who died after 18 months of imprisonment in North Korea, spoke out Friday against President Donald Trump's defense of North Korean leader Kim Jong Un in their son's death.
"We have been respectful during this summit process. Now we must speak out. Kim and his evil regime are responsible for the death of our son Otto. Kim and his evil regime are responsible for unimaginable cruelty and inhumanity. No excuses or lavish praise can change that," Fred and Cindy Warmbier said in a statement.
Several hours later, on Friday afternoon, Trump tweeted that he had been "misinterpreted" and that "Of course I hold North Korea responsible … for Otto's mistreatment and death." But notably, he didn't mention Kim by name.

….for Otto’s mistreatment and death. Most important, Otto Warmbier will not have died in vain. Otto and his family have become a tremendous symbol of strong passion and strength, which will last for many years into the future. I love Otto and think of him often!

— Donald J. Trump (@realDonaldTrump) March 1, 2019
The University of Virginia student had been on a tour when he was arrested for tearing down a poster.
On Thursday in Hanoi, despite having publicly supported the Warmbier family previously, Trump said he believed the dictator who runs North Korea's ruthless regime when he said he didn't know Warmbier was being tortured.
"I don't believe that he would have allowed that to happen," Trump said of Kim Jong Un. The president relayed what he said Kim had told him — that he "didn't know about it" — and said he would "take [Kim] at his word."
"He felt badly about it," the president said at a post-summit news conference. He knew the case very well, but he knew it later," Trump added.

White House counselor Kellyanne Conway furthered the president's comments Friday on Fox News and responded to the Warmbiers' statement.
"The president agrees with the Warmbier family and holds North Korea responsible for Otto Warmbier's death. He's said that time and again," Conway said. "What the president is saying is that there is no indication Chairman Kim knew what happened to Otto Warmbier when it happened. It was after he was returned here to the United States that we all learned of his very sad and frankly unforgivable state."
Conway's comments, like the president's, separate Kim from what happened under his regime – despite the show trial Otto was subjected to in a North Korean courtroom which was then used as a propaganda tool for the regime.

His appearance in that courtroom would be the last time the Warmbiers saw their son before he was flown back to the U.S. in a coma.
The Warmbiers sued the North Korean government for more than a $1 billion late last year, saying U.S. officials had publicly confirmed that North Korea tortured their 22-year-old son. As proof, the family cited a tweet from Trump in response to an interview they did with Fox News. "Otto was tortured beyond belief by North Korea," Trump tweeted in September of 2017.
Otto, who died just six days after being brought back to the U.S., returned to his home state of Ohio blind, deaf and "jerking violently and howling," according to the lawsuit. Otto's lower teeth looked as if they'd been rearranged by a pair of pliers, the court documents said.
When the Warmbier's testified in federal court in December, it was about six months after Trump's first summit with North Korea's Kim. The family had, at that point, established a close relationship with the president, who was adamant that Otto "did not die in vain." About a month later, Otto's parents Cindy and Fred attended Trump's 2018 State of the Union address and stood, rife with grief, to a standing ovation as the president denounced North Korea's brutal treatment of their son.

"You are powerful witnesses to a menace that threatens our world, and your strength inspires us all. Tonight, we pledge to honor Otto’s memory with American resolve," Trump said during his speech.