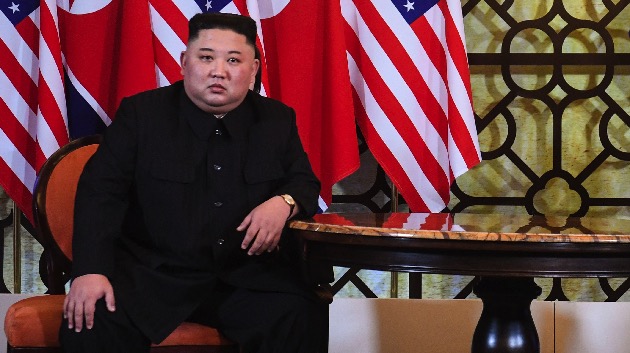 SAUL LOEB/AFP/Getty Images(HANOI, Vietnam) — North Korean leader Kim Jong Un spent most of Friday in his hotel in Hanoi — a day after he failed to reach a deal on sanctions or denuclearization with President Donald Trump.
Kim attended a red-carpeted welcome ceremony hosted by Vietnam’s President Nguyen Phu Trong, the country’s top leader and general secretary of the Communist Party, at the Presidential Palace. The opening event was followed by a separate meeting with Prime Minister Nguyen Xuan Phuc.
Kim was scheduled to attend a dinner banquet with his delegation.
This is the first time a North Korean head of state visited Vietnam in 55 years.
Contrary to expectations that Kim could visit Vietnam’s industrial and resort sites after the summit for two days, he is scheduled to depart earlier than expected on Saturday morning — first by car to the Chinese border, then on his armoured train for the two-and-a-half day-long journey back to Pyongyang at 10 am local (10pm EST).
Kim's departure comes after his second summit with Trump — a meeting that was widely viewed as a failure on both sides. Trump and senior U.S. officials said negotiations fell apart after the North Koreans pushed for sanctions to lifted entirely, while Pyongyang said it was willing to disable its main nuclear facility in exchange for an easing of sanctions.
Copyright © 2019, ABC Radio. All rights reserved.