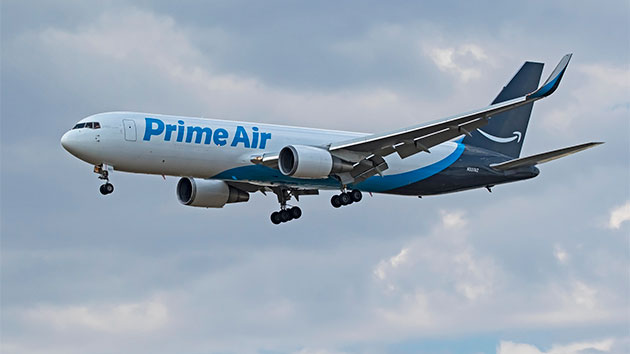 KGrif/iStock(HOUSTON) — The cockpit voice recorder from the Amazon Prime cargo jet that crashed into the marsh of Trinity Bay in Anahuac, Texas, last weekend has been recovered and was being taken to Washington, D.C., for analysis, investigators announced on Friday.

An official from the National Transportation Safety Board told ABC News the recorder, expected to contain audio from inside the flight's cockpit, would arrive Friday night in Washington, D.C., where a team of investigators would assess its condition. If it's decided the recorder is ready for analysis, the NTSB would assemble a team to listen to the recording as soon as possible.

The voices of the pilots and the audible warnings from the flight systems should paint a clearer picture of what occurred in the final moments before all three crew members were killed when the Boeing 767 took a nosedive from roughly 6,000 feet, crashing into the mud.

The NTSB will create a transcript of those final moments that will later be released with a hoard of other documents, typically weeks or months after an accident occurs. If investigators decide the findings are particularly remarkable, they release a summary. The audio itself is not expected to be released.

Search operations on scene continue in an effort to find the flight data recorder, which records information from aircraft flight systems.

Video of the final seconds of the jet's plummet surfaced Wednesday and investigators hope it will bring other clues as to what caused the famously-reliable jet to fall out of the sky while approaching Houston on Saturday.

The video, from a security camera at a nearby school, is the first publicly-revealed video of the crash and showed the jet in an apparent high-speed nose dive towards the ground before disappearing. Investigators say the jet was at an altitude of about 6,000 feet before it suddenly crashed into a marsh.

Officials previously said they have another video from a nearby jail showing the final five seconds of flight, but that video has not been released.

The three people aboard a cargo jet contracted by Amazon are considered deceased although human remains found at the crash site have not yet been positively identified by the medical examiner, Chambers County Sheriff Ryan Hawthorne said during a press conference Sunday afternoon.

The Boeing 767 jetliner, which was flying from Miami to Houston, plunged into Trinity Bay near Anahuac Saturday just before 1 p.m., officials said.