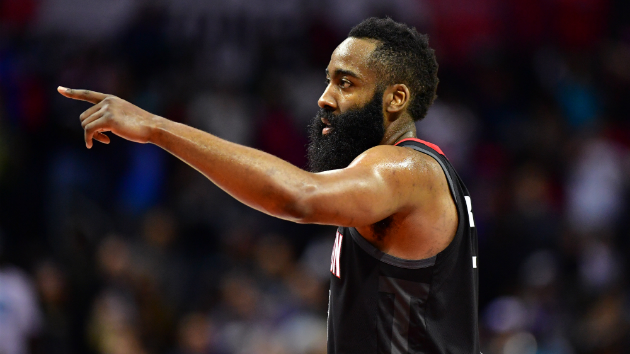 Phil Ellsworth / ESPN Images(HOUSTON) — After scoring 58 points, James Harden pointed to the Houston Rockets' defense and team effort.
Harden also had 10 assists and seven rebounds and the Rockets overcame a 21-point third-quarter deficit to beat the Miami Heat 121-118 on Thursday night.
"We were lackadaisical on defense, especially in that second quarter," Harden said. "They gained confidence and knocked down shots. They were just too comfortable, so we had to pick the pressure up in the second half, create some turnovers and energy with our defense."
He fell three points short of his career high set at New York on Jan. 23, and had the most points ever against the Heat — breaking Willie Burton's mark of 53 for Philadelphia on Dec. 13, 1994.
"We get the stat sheet at the end of the game, and I saw he had 58," Austin Rivers said. "All of us were like, 'He had that many points?' We had no idea he had that many points. That's a lot of points. He was incredible."
Harden made 8 of 18 3-pointers and was 16 of 32 overall from the field and 18 of 18 on free throws.
"I wanted to be aggressive and continue to attack the rim," Harden said. "I took my shots when I had the opportunities, and not only myself, but Austin (Rivers), Gary (Clark), Chris (Paul) made some plays down the stretch. It was a total team effort tonight."
Rivers scored 17 points, and Paul and Clark each had 14 to help Houston win its fourth straight game. The Rockets shot 49 percent, including 19 of 46 on 3-pointers.
Houston held Miami to 20 points in the fourth quarter, outscoring the Heat by 15 in the decisive quarter.
Copyright © 2019, ABC Radio. All rights reserved.