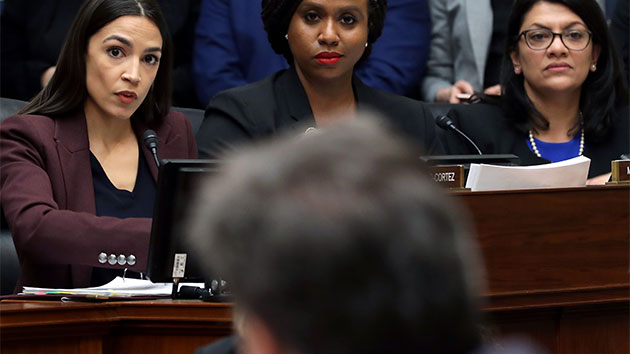 Chip Somodevilla/Getty Images(WASHINGTON) — Freshman congresswoman Alexandria Ocasio-Cortez is winning high marks from the left for her questioning this week of former Trump attorney Michael Cohen, which may have produced some leads into President Donald Trump’s financial dealings as a real estate and business mogul and given Democrats new reasons to demand his tax returns.

The praise she's getting also may have caught the attention of Trump himself with the president firing off a tweet Friday bemoaning the pursuit of his financial records and encouraging his Republican loyalists on Capitol Hill to flip the tables and investigate Democrats.

Oh’ I see! Now that the 2 year Russian Collusion case has fallen apart, there was no Collusion except bye Crooked Hillary and the Democrats, they say, “gee, I have an idea, let’s look at Trump’s finances and every deal he has ever done. Let’s follow discredited Michael Cohen…..

…and the fraudulent and dishonest statements he made on Wednesday. No way, it’s time to stop this corrupt and illegally brought Witch Hunt. Time to start looking at the other side where real crimes were committed. Republicans have been abused long enough. Must end now!

On Wednesday, "AOC," as she’s known both on Capitol Hill and across the nation due in large part to her social media presence — more than three million Twitter followers — arrived at the blockbuster hearing to paparazzi-level camera clicks and even applause from members of the public who had lined up to get a chance to witness the event firsthand.

For almost seven hours, she appeared to listen intently as Republicans and Democrats with more seniority on the Oversight and Government Reform Committee grilled Cohen, finally, in the late afternoon, taking her turn as the third-to-last member to ask questions.

In the days leading up to the hearing, as is the long custom on Capitol Hill, the committee's professional staff worked with the congresswoman’s personal aides to select a line of questioning that Ocasio-Cortez could then fine tune when her turn came in the high-profile showdown. Other Democrats as well chose from a list of 35 questions the staff had readied for the majority.

While other ways Democrats could take might be more successful at obtaining the president’s personal tax returns, Ocasio-Cortez followed up on Missouri Democrat William Lacy Clay’s questions, leading Cohen to disclose how he claimed Trump had strived to defraud insurance companies and misrepresent the value of his assets, laying the groundwork to possibly acquire the tax returns by committee subpoena.

In less than five minutes, Ocasio-Cortez first prompted Cohen to name names of people who could corroborate the allegations and to state his belief that Trump misrepresented inflated assets to an insurance company.

“Who else knows that the president did this?” Ocasio-Cortez, who is also a member of the House Financial Services Committee, asked. Cohen then named Trump Organization senior executives Allen Weisselberg, Ron Lieberman and Matthew Calamari.

“Where would the committee find more information on this?” she persisted. “Do you think we need to review his financial statement and his tax returns into order to compare them?”

“Yes,” Cohen answered, taking the bait. “And you’d find it at the Trump Org.”

Ocasio-Cortez then tied that answer to a Trump golf course in her congressional district in the Bronx, where she said the president reportedly benefited from $127 million in taxpayer dollars spent to build the course while pocketing all the profits, charging Trump “benefited at the expense of the public.”

“Mr. Cohen, I want to ask you about your assertion that the president may improperly devalued his assets to avoid paying taxes,” she said, pointing at a 2016 Washington Post report that revealed Trump claimed on financial disclosures that Trump National Golf Club in Jupiter, Florida, was worth more than $50 million while reporting the same property was worth no more than $5 million to local tax authorities.

Cohen testified the news report was accurate and “identical to what [Trump] did” when he reported conflicting values for Trump National Golf Club at Briarcliff Manor in the Bronx.

“Yes,” Cohen answered. “What you do is you deflate the value of the asset and then you put in a request to the tax department for a deduction."

Ocasio-Cortez finished her turn by pointing to a 2018 New York Times report that Trump helped formulate a strategy to undervalue his parents’ real estate holdings by hundreds of millions of dollars on his tax returns, “sharply reducing his tax bill when those properties were transferred to him and his siblings.”

Cohen said he wasn’t privy to the 1990s transaction, but told Ocasio-Cortez that Allen Weisselberg, the chief financial officer at the Trump Organization, would know the answers.

"And would it help for the committee to obtain federal and state tax returns from the president and his company to address that discrepancy?" she asked.

"I believe so,” Cohen agreed.

Even though she hadn't initiated the questions, Ocasio-Cortez was subsequently praised for her prosecutorial style delving into Trump's financial dealings and providing a roadmap for future hearings.

I always entertained law school, but couldn’t afford it. So now I’m learning in the job 🙂 https://t.co/hez9EF7ldr

After she won the spotlight for what was seen as her questioning prowess, the Huffington Post obtained comments from the aides who helped her prepare for the hearing.

Thanks! I really appreciate that. We need to acknowledge the people who worked tirelessly behind the scenes to make it happen.@OversightDems staff w/ my staff were double-checking info requests I had just minutes before my turn.
I’m truly inspired by their selfless commitment. https://t.co/Trg5na0lHn

Friday morning, the congresswoman seemingly batted away eigned outrage expressed by a New York Times reporter that her legislative aides frequently comment on-the-record, with attribution, a rarity on Capitol Hill.

My staff + I come to decisions through robust discussion + debate – we operate as a team.
They are also intro’d at community events, bc I want constituents to grow familiar w/ the people picking up the phone when they call.
As an educational organizer, I view it as development. https://t.co/iF5Zwp9t10

Making sure she comes across as sharing the spotlight is all in a day’s work for the media-savvy "AOC' – even if most of the spotlight operators aren’t aiming at anyone else.

Grand jury in Georgia expected to convene in probe of Trump’s efforts to overturn election
Watch Michael B. Jordan exact revenge in ‘Without Remorse’
Judge returns to bench after son’s murder: ‘I will not be frightened or be afraid to do what I love to do’
Infuriated by Dems dropping minimum wage hike, progressives say ‘time for wealth tax’
‘The Voice’ returns for its 20th season with Kelly, John, Blake & Nick Jonas, who’s “here to win”
Trump’s CPAC speech repeats false election fraud claims, teases 2024 presidential run