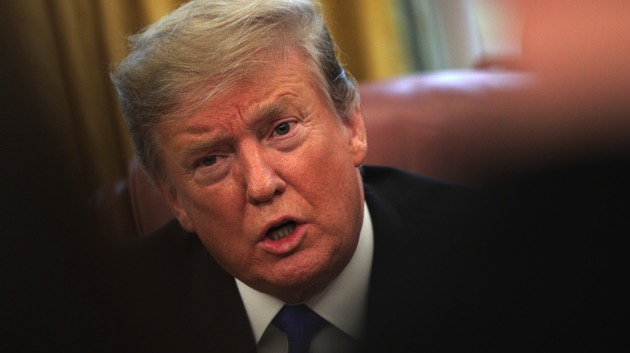 Alex Wong/Getty Images(WASHINGTON) — Reacting to his former personal attorney Michael Cohen's appearance before the House Oversight Committee, President Donald Trump on Thursday slammed his testimony as "shameful," and said it was a "fake hearing" and a "terrible thing" to do while he was in Vietnam for a second summit with North Korean dictator Kim Jong Un.
"I tried to watch as much as I could but I wasn’t able to watch too much because I was busy but having a fake hearing like that and having it in the middle of this very important summit is really a terrible thing, they could have made it two days later or next week and it would have been better and they would have had more time," Trump said in response to a question from ABC Chief White House Correspondent Jonathan Karl.
The president said the one bright spot was that Cohen testified there was no collusion with Russia. More accurately, Cohen said he had no evidence, but had suspicions as well.
"He lied a lot but it was very interesting but he didn't lie about one thing, he said no collusion with the Russian hoax, and I said I wonder why he didn't just lie about that too, he lied about everything else. I mean he lied about so many different things," Trump said.
Sources told ABC News that the president did watch at least part of the hearing, but did at one point stop watching to speak with Secretary of State Mike Pompeo on the phone. The president and his top allies believe that the timing of the hearing undermined efforts to negotiate with North Korea, sources told ABC News.
Cohen's appearance was first announced in January but postponed three times due to reasons ranging from his expressing fears for his personal safety to "post-surgery medical needs."
And while there's no evidence that the rescheduled dates were intended to coincide with the president's travel overseas, Republicans accused Democrats of openly trying to scuttle Trump's efforts to convince North Korea to give up its nuclear ambitions.
Top trump ally GOP Sen. Lindsey Graham said on Wednesday that the president was not happy about Cohen's testimony before the committee and said he spoke to the president the night before.
“I think he was upset that he's going to have dueling shows here,” Graham said. “It did bother him that there's going to be a split screen between Michael Cohen and him meeting with Kim Jong Un," Graham said.
On Wednesday, Cohen testified about his experience in the Trump orbit before the House Oversight Committee, painting a harsh portrait of the president as an unscrupulous businessman who may have committed a crime while in office.
Republican lawmakers came out swinging against Cohen, accusing the one-time "fixer" of being an attention-seeking "pathological liar" who was looking to land a book deal. The GOP lawmakers depicted the hearing as a circus orchestrated by Hillary Clinton's allies. Even Donald Trump Jr. at one point chimed in on Twitter, comparing Cohen's testimony to that of a jilted lover.
The tactics were aimed at blunting the impact of Cohen's testimony, which could be deeply damaging to the president's brand. Cohen, who has been disbarred as a lawyer, described with remorse writing threatening letters on Trump’s behalf and spending much of a decade devoted to protecting “a con man” and “a cheat.”
Conservatives though said they weren't buying it and noted repeatedly that Cohen had been convicted for lying to Congress. Cohen confirmed that he planned to pursue a book deal on his experience.
Copyright © 2019, ABC Radio. All rights reserved.