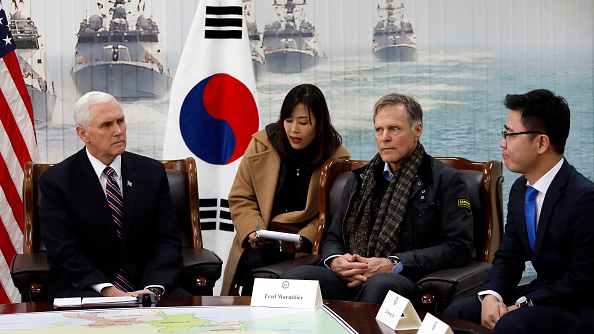 Woohae Cho/Getty Images(WASHINGTON) — Barely two months before this week's Trump-Kim summit in Vietnam, the family of Otto Warmbier sat in a Washington, D.C., courtroom and relived, with details painful even to those who never knew him, the moment they saw their once healthy, jovial young son as he returned home from almost 18 months imprisoned in North Korea, a shell of his former self.
Seeking justice for the pain and suffering, the Warmbiers sued the North Korean government for more than a $1 billion late last year, saying U.S. officials had publicly confirmed that North Korea tortured their 21-year-old son, who died just six days after being brought back to the U.S.
The University of Virginia student had been on a tour when he was arrested for tearing down a poster.
On Thursday in Hanoi, despite having publicly supported the Warmbier family, President Trump struck a much different tone, saying he believed the dictator who runs North Korea's ruthless regime when he said he didn't know Warmbier was being tortured.
"I don't believe that he would have allowed that to happen," Trump said of Kim Jong Un. The president relayed what he said Kim had told him — that he "didn't know about it" — and said he would "take [Kim] at his word."
"He felt badly about it," the president said at a post-summit news conference. He knew the case very well, but he knew it later," Trump added.
The attorney for Warmbier's parents said they were unlikely to respond to Trump.
On Thursday, members of Congress began to react, but some Republicans, facing new pressure to condemn North Korea's involvement in Warmbier's death, did so without openly criticizing the president.
"Americans know the cruelty that was placed on Otto Warmbier by the North Korean regime. Our hearts are with the Warmbier family for their strength and courage. We will never forget Otto," tweeted Trump's former U.S. Ambassador to the U.N. Nikki Haley, who served during negotiations over Warmbier's imprisonment and release.
Sen. Rob Portman, a Republican from Warmbier's home state of Ohio, issued a simple statement.
"We must remember Otto, and we should never let North Korea off the hook for what they did to him," Portman said.
In sharp contrast to Portman's statement, Democratic Sen. Sherrod Brown, also from Ohio, blasted the president for sending the message that he "believes autocrats when they lie."
"You never should go meet with the North Korean dictator without bringing up the name of Otto Warmbier and bring up the whole issue of human rights over and over — that's who we are as a country. President Bush would do it. President Clinton did it. President Obama did it. President Reagan did it and it's — it just makes me sad,” Brown said.
Brown declined to speak on behalf of the family, saying he knows Otto's parents "and they speak for themselves."
When the Warmbier's testified in federal court in December, it was about six months after Trump's first summit with North Korea's Kim. The family had, at that point, established a close relationship with the president, who was adamant that Otto "did not die in vain." About a month later, Otto's parents Cindy and Fred attended Trump's 2018 State of the Union address and stood, rife with grief, to a standing ovation as the president denounced North Korea's brutal treatment of their son.
“We need only look at the depraved character of the North Korean regime to understand the nature of the nuclear threat,” Trump said at the time.
According to the lawsuit, Otto returned to the U.S. "blind and deaf," with a shaved head and "a feeding tube coming out of his nose." He was "jerking violently and howling, and was completely unresponsive to any of [the Warmbiers] efforts to comfort him. They also noticed that his once straight teeth were now misaligned and had been forced into abnormal positions, particularly in the front of his mouth," the lawsuit said.
It's not the first time the president has gone against the consensus of U.S. government officials and sided instead with foreign leaders accused of crimes.
After CIA director Gina Haspel briefed Republican lawmakers on the murder of Washington Post journalist Jamal Khashoggi, Republican senators said there was "zero question" the Saudi Crown Prince Mohammed bin Salman ordered the brutal murder.
South Carolina Republican Sen. Lindsey Graham, who has a close relationship with the president, said there wasn't just a "smoking gun," but a "smoking saw," referencing the bone saw believed to have been used to dismember Khashoggi's body.
Trump, however, repeated the denials of Saudi officials. “King Salman and Crown Prince Mohammad bin Salman vigorously deny any knowledge of the planning or execution of the murder of Mr. Khashoggi,” the president said in a statement.
And at a summit in Helsinki, Finland, last summer, Trump said he believed Russian President Vladimir Putin's denial of meddling in the 2016 U.S. election. The U.S. intelligence community found that Russia did, in fact, interfere in the election — even indicting 12 Russian government agents for hacking the Democratic Party during the 2016 election — but Trump couched those findings with his face-to-face meeting with Putin, who human rights organizations blame for a long list of abusive acts taking place under Russia's oppressive government.
"I have President Putin, he just said it's not Russia. I will say this. I don't see any reason why it would be," Trump said, standing next to the Russian president in Helsinki. “So I have great confidence in my intelligence people, but I will tell you that President Putin was extremely strong and powerful in his denial today.”