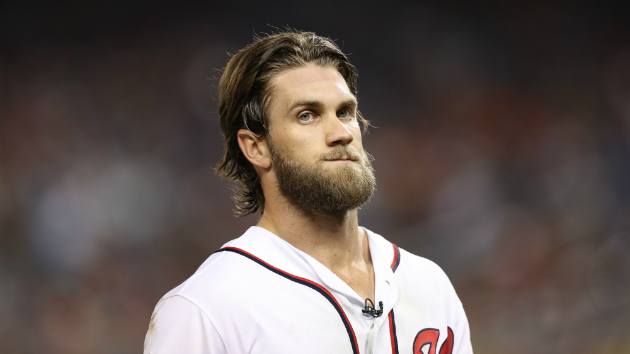 Allen Kee / ESPN Images(NEW YORK) — The number of teams interested in landing free-agent slugger Bryce Harper continues to grow.
On Tuesday, the San Francisco Giants sat down with the right fielder for a second time, ESPN has confirmed. During the meeting, the Giants brought up the possibility of a 10-year deal with Harper, according to multiple reports.
The news comes after the former National League MVP met with the Philadelphia Phillies over the weekend. The Los Angeles Dodgers have also recently expressed interest in signing Harper.

Sources tell ESPN that Harper is interested in a long-term contract. The 26-year-old is said to be looking for a better deal than the 10-year, $300 million contract the Washington Nationals reportedly offered him when the 2018 season came to a close.

Harper has spent his entire MLB career with the Nationals. He wrapped up last season with a .249 batting average, 34 home runs and 100 RBIs.

In October, he opted for free agency.