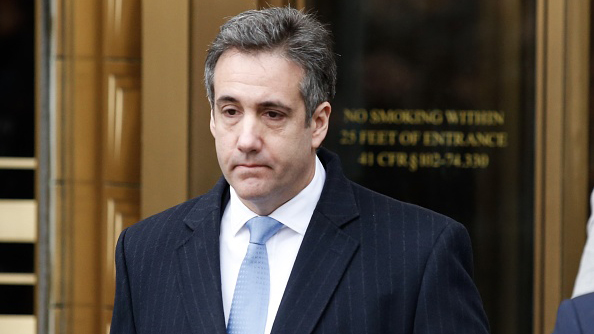 Eduardo Munoz Alvarez/Getty Images(WASHINGTON) — Two senior House Republicans on Thursday referred public testimony by Michael Cohen to the Justice Department, alleging that President Donald Trump's former personal attorney and fixer committed perjury when he testified at Wednesday's nationally-televised hearing.
"We write to refer significant evidence that Michael D. Cohen committed perjury and knowingly made false statements during his testimony before the [House] Oversight and Reform Committee … hearing," Reps. Jim Jordan of Ohio, top Republican on the panel, and Mark Meadows of North Carolina, another committee member, wrote in a letter to Attorney General William Barr.
They called Cohen's testimony "a spectacular and brazen attempt to knowing and willfully testy falsely and fictitiously to numerous material facts."
"While testifying under oath, Mr. Cohen made what appear to be numerous willfully and intentionally false statements of material fact contradicted by the record established by the Justice Department," the two lawmakers continued, referencing the plea agreement Cohen reached with prosecutors in the Southern District of New York in which he pleaded guilty to lying to Congress about whether then-candidate Donald Trump, during the presidential campaign, was pursuing a lucrative deal to build a Trump Tower in Moscow, something Trump had denied.
Thursday's Republican move against Cohen came his third and final day of congressional testimony, this time behind closed doors before members of the House Intelligence Committee.
"Mr. Cohen testified truthfully before the House Oversight Committee. He took full responsibility for his guilty pleas," Cohen attorney Lanny Davis said in response. "He also backed up much of his testimony with documents. It may not be surprising that two pro-Trump Committee members known now have a baseless criminal referral. In my opinion, it is a sad misuse of the criminal justice system with the aura of pure partisanship,” Davis said.
In requesting a DOJ perjury investigation, Jordan and Meadows, two of the president's top congressional allies, pointed to six areas of the nearly eight hours of Cohen's public testimony Wednesday, among them Cohen's claim he never committed bank fraud and his denial that he sought a White House job as Trump first came into office.
The president's son, Donald Trump Jr., tweeted "Don’t forget #cohen also lied under oath about 3 times saying he wasn’t interested in a role in the administration. In truth he actively lobbied anyone that would listen for the Chief of Staff role or anything else."
Sources have told ABC News that around the time of the presidential transition, Cohen was angling for a job in the new administration either as White House chief of staff or White House Counsel. After he was turned down, Cohen blamed Jared Kushner and Ivanka Trump for blocking him.
A former NYPD detective and Cohen friend, Bo Dietl, weighed in on Twitter, saying, "I know Michael Cohen personally for many years and he told me several times that he was very angry and upset that he didn't get a post in the WH."
For his part, House Oversight Chairman Elijah Cummings, D-Md., is standing by Cohen, whom he called "truthful" and "remorseful" after the hearing, telling ABC's Ben Siegel when asked if Cohen lied about wanting to be Trump's White House chief of staff, "I don’t have any knowledge of that, none. He said he wasn’t, and I believe him. Think about it, he could make a hell of a lot more money, a hell of a lot more money, outside the White House than inside the White House. I don’t know why you would want to do that.”
Under questioning from Rep. James Comer, a Kentucky Republican, Cohen told the committee, "I never defrauded any bank."
Cohen pleaded guilty in August to six felonies associated with his personal business dealings – including tax evasion and making false statements to a bank – and two felony campaign finance violations in connection with his role in arranging non-disclosure agreements during the campaign with two women who had claimed past affairs with Trump.
Republicans attacked Cohen repeatedly on Wednesday as the former Trump confidant laid out a blistering, laundry list of charges, saying, "He is a racist, he is a conman, and he is a cheat."
At one point, Cohen, who begins his three-year prison sentence in May, warned Republicans, “It’s that sort of behavior that I’m responsible for. I’m responsible for your silliness because I did the same thing that you’re doing now for 10 years. I protected Mr. Trump for 10 years.”