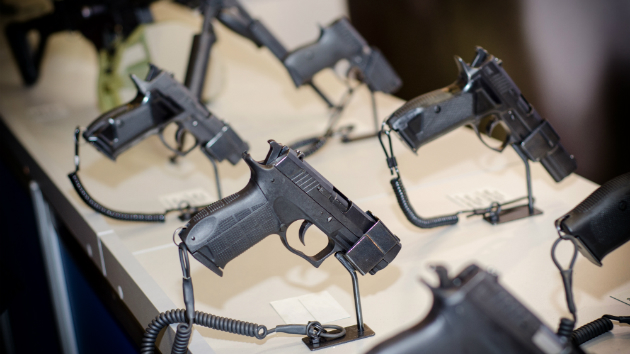 artas/iStock(WASHINGTON) — House Democrats made good on a top campaign promise on Wednesday, passing a bill to strengthen background checks for people purchasing firearms.
After taking control in November, Democrats made it a priority to bring up the Bipartisan Background Checks Act of 2019 after years of Republicans blocking a vote.
The bill, which passed 240-190, now heads to the Republican-controlled Senate, where it's unlikely to advance.
The measure would require universal background checks for most gun purchases or transfers — including those at gun shows, conducted online or through classified ads — but not if the firearm is purchased from a relative. The measure also allows temporary transfers of firearms without a background investigation to prevent imminent death or great bodily harm, and by law enforcement and the military.
“There is no person in this body whose political survival is more important than the survival of our children,” House Speaker Nancy Pelosi, D-Calif., said during debate on the measure. “We're grateful, again, to the young people, parents, survivors across America who have told their stories, marched for their lives and demanded change. This bill delivers that change: ensuring that people who are a danger to themselves and others cannot purchase a gun and perpetuate violence in our communities.”
Republicans voted overwhelmingly against the measure — with just eight Republicans voting in favor, including Reps. Vern Buchanan, Mario Diaz-Balart, Brian Fitzpatrick, Will Hurd, Peter King, Brian Mast, Chris Smith and Fred Upton.
“H.R. 8 would not prevent gun violence,” Rep. Morgan Griffith, R-Va., argued. “It would make the exercise of Second Amendment freedoms and the right to self-defense more difficult for law-abiding citizens.”
Two Democrats voted against the measure — Reps. Jared Golden of Maine and Colin Peterson of Minnesota.
Former Rep. Gabrielle Giffords, who was badly injured in a mass shooting in 2011, called the vote “a testament to courage.”
“When the days were darkest when it looked like the gun lobby’s money and influence would forever silence any debate in Washington about stronger gun laws, courage shone through,” Giffords stated. “Courage embodied by relentless advocates and resilient survivors who never lost sight of the fact that a safer future is possible. Courage exemplified by leaders who victoriously ran for office promising to fight for solutions to make our country safer from gun violence. Just eight weeks into the new Congress, courage is what inspired the U.S. House of Representatives to pass H.R. 8, the Bipartisan Background Checks Act.”
The House will vote on a second gun control measure on Thursday, H.R. 1112 Enhanced Background Checks Act of 2019, which would address the so-called “Charleston Loophole” that currently allows the sale of a firearm to proceed if a background check is not completed within three days. That bill also is expected to pass the House, though it is not anticipated to see the light of day in the Senate.
Copyright © 2019, ABC Radio. All rights reserved.