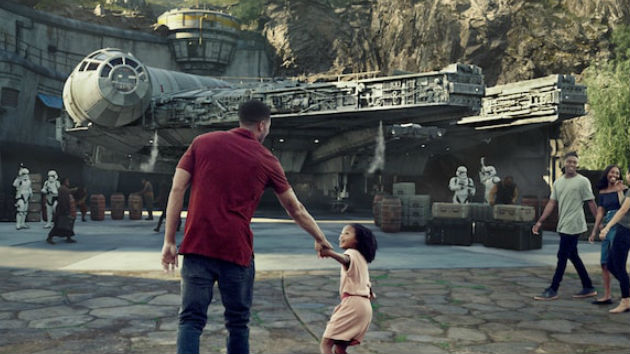 Disney Parks(CALIFORNIA) — Soon you'll be able to eat like they did a long, long time ago, in a galaxy far, far away, when you check out the menu for Oga's Cantina, one of the restaurants in Disney's new Star Wars: Galaxy's Edge attraction.

The goal of the immersive destination is to make visitors feel as if they're walking the streets of the trading outpost planet of Batuu, alongside all the droids and aliens you'd expect in a Star Wars film.

At Oga's Cantina, visitors will, of course, be able to down some blue milk — a beverage first quaffed by Mark Hamill's Luke Skywalker in 1977's Star Wars: A New Hope — but re-imagined with a coconut and almond milk base.

"If you're walking around Florida in the middle of August, the last thing you want is a heaping glass of milk," jokes Scott Trowbridge, the creative executive at Walt Disney Imagineering.

Other non-alcoholic drinks include Jabba Juice, and the Carbon Freeze, but Galaxy's Edge will also become the first-ever Disney park attraction to sell beer and mixed drinks. To that end, there's are beverages called the Jedi Mind Trick, the Fuzzy Tauntaun, and White Wampa Ale. For you non-nerds, the Wampa is the snow creature that whomped Luke in Empire Strikes Back; the Tauntaun is the creature he rode in that same movie.

Menu offerings include a wrap with a throat-tingling spicy sauce meant to recall Darth Vadar's Force choke, and sweet-and-spicy "Kaadu sticky ribs." They're pork, of course, but "kaadu" is the bird-like creature the natives ride on Jar Jar Binks' planet Naboo.

Star Wars: Galaxy's Edge opens this summer at Disneyland in Anaheim, California, and this fall at Disney World in Orlando, Florida.