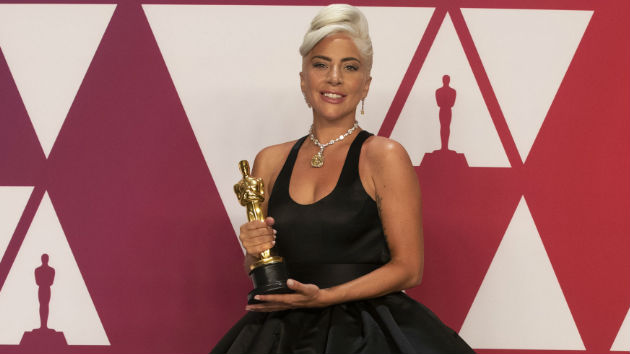 "You brought your luggage?" wondered Kimmel, prompting Gaga to take out the bag her award for Best Original Song to a few audible gasps from the audience.

Gaga talked about her and Bradley Cooper's stunning live performance of "Shallow" at the Oscars, which had social media buzzing about their romantic chemistry. People online even speculated that because of the performances heated intimacy, it had to be real.

Rolling her eyes, Gaga was having none of it: "First of all social media, quite frankly, is the toilet of the Internet."

"People saw love and guess what? That's what we wanted you to see," said Gaga, reminding viewers that "Shallow" is a love song and A Star is Born, a love story.

She credited her and Bradley's hard work during the week leading up to the show for the strong reactions to their performance, with the majority of her praise aimed at her on-screen and — for one night — on-stage director.

"Everything that you saw, the way that it was shot, the way that they pushed the piano out … that was all him," shared Gaga who admits she almost never relinquishes control of a live performance.

Gaga praised Bradley for staging and lighting the performance, and was equally kind about his skill as a musician. "To see him sing live and know that he sang every take in this movie live, every single time" was a source of pride for the acclaimed artist.

A Star is Born is being re-released in theaters for one week, with an additional 12 minutes of extended footage, starting Friday, March 1.