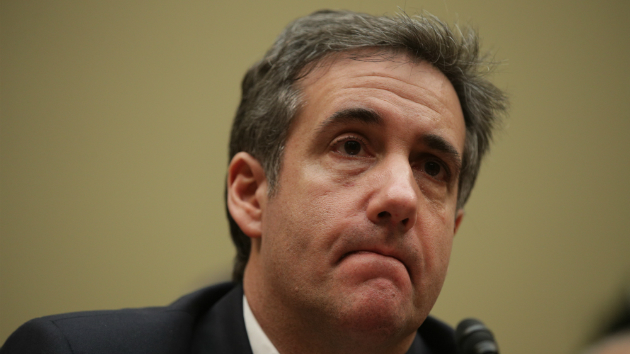 Alex Wong/Getty Images(WASHINGTON) — Michael Cohen, the longtime former fixer and personal attorney for President Donald Trump, fielded questions for nearly eight hours on Wednesday from all 42 members of the House Oversight Committee. But in some cases, Cohen’s testimony raised more questions than answers — particularly with regard to Trump’s legal exposure.

Here are five moments from Wednesday’s hearing that could have potential consequence moving forward:
Cohen claims Trump involved in an undisclosed 'illegal act,’ and that SDNY investigating
Legal experts have long warned that one of the biggest potential threats to Trump’s political career and business empire lies not with special counsel Robert Mueller’s probe of Russian interference in the 2016 elections, but with federal prosecutors in the Southern District of New York.
In his testimony on Wednesday, Cohen teased an unknown “wrongdoing or illegal act” he claimed Trump has committed but said he could not give details because of the ongoing investigation headed by the Manhattan U.S. Attorney’s office.

Asked by Rep. Raja Krishnamoorthi, D-Ill., whether there is “any other wrongdoing or illegal act that you are aware of regarding Donald Trump that we haven't yet discussed today,” Cohen replied he was aware.

“Yes,” he said, “and again, those are part of the investigation that's currently being looked at by the Southern District of New York.”

Trump was aware of WikiLeaks release before emails dropped, Cohen claims. An anecdote about Trump’s alleged communication during the campaign with Roger Stone, a former campaign adviser, could shed new light on the then-candidate’s knowledge of an impending dump of documents that changed the course of the election.
“I was in Mr. Trump’s office when his secretary announced that Roger Stone was on the phone,” Cohen said. “Mr. Stone told Mr. Trump that he had just gotten off the phone with Julian Assange and that Mr. Assange told Mr. Stone that, within a couple of days, there would be a massive dump of emails that would damage Hillary Clinton’s campaign.”

“Mr. Trump responded,” Cohen said, “by stating to the effect of ‘wouldn’t that be great.’”

The revelation, if true, could change the public’s fundamental understanding of what Trump knew about WikiLeaks’ plans and when.
Trump has previously said he had no prior knowledge of WikiLeaks’ plans, and both Trump and Stone have said they never discussed WikiLeaks’ plans.

Stone denied Cohen’s recollection of this event on Wednesday.
Did Cohen implicate Trump in fraud?
Cohen spent more than a decade as one of Trump’s closest business advisers, and on Wednesday he offered a glimpse into ways the real estate magnate allegedly manipulated the value of his assets to his benefit.

In a line of questioning by Rep. Alexandria Ocasio-Cortez, D-N.Y., Cohen described how he said Trump sought to garner tax deductions by reducing the value of his golf properties.

“You deflate the value of the asset and put in a request to the tax department for a deduction,” Cohen said.

Rep. Ocasio-Cortez also pressed Cohen about whether Trump had even provided “inflated assets to an insurance company.”
“Yes,” Cohen said. Cohen named Allen Weisselberg, the CFO of the Trump Organization, and other company executives as potential corroborators of his claims.
Last year, U.S. prosecutors granted immunity to Weisselberg, the Trump Organization's longtime chief financial officer in the investigation of Cohen, sources previously told ABC News.
Weisselberg was subpoenaed in August to appear before a grand jury hearing a case presented federal prosecutors in New York’s Southern District, as ABC News previously reported.
Cohen detailed Trump’s involvement in hush money payments
The narrative took another turn on Wednesday when Cohen revealed new information about a hush-money payment to adult film actress Stormy Daniels, whose real name is Stephanie Clifford.
In his opening statement, Cohen said Trump promised to reimburse the $130,000 payment to Daniels during a visit to the White House shortly after Trump’s inauguration.

“So picture this scene – in February 2017, one month into his presidency, I’m visiting President Trump in the Oval Office for the first time. It’s truly awe-inspiring,” Cohen said, “and he says to me something to the effect of…’Don’t worry, Michael, your January and February reimbursement checks are coming.’”

Later on, Cohen revealed that Trump sought to coordinate public messaging about the payments in February of 2018.
Trump instructed Cohen during a phone call to say “he was not knowledgeable of the reimbursements and he wasn't knowledgeable of my actions,” Cohen said, referring to the hush money payments.

Trump publicly denied knowledge of the payments before his attorney, Rudy Giuliani, confirmed later — in May 2018 — that Trump reimbursed Cohen for the $130,000 payment to Daniels. Trump denies the affair with Daniels ever took place.
Cohen reveals two attorneys who reviewed his 2017 letter to Congress
In his opening statement on Wednesday, Cohen said one of “Mr. Trump’s personal lawyers reviewed and edited my statement to Congress about the timing of the Moscow Tower negotiations before I gave it.”

The content of that letter ultimately became the basis of Mueller’s indictment of Cohen for lying to Congress.

During questioning, Cohen revealed that the two lawyers who reviewed the letter were Jay Sekulow, the current attorney for Trump, and Abbe Lowell, a high-powered Washington attorney who represents both Ivanka Trump and Jared Kushner.

In a statement issued late Wednesday, Sekulow rebutted Cohen’s suggestion that he “edited or changed” the letter.

“Today’s testimony by Michael Cohen that attorneys for the President edited or changed his statement to Congress to alter the duration of the Trump Tower Moscow negotiations is completely false," Sekulow said.

Cohen pleaded guilty in November to lying to Congress about whether Trump and his company had pursued the Moscow real estate project while Trump was securing the GOP nomination in 2016.