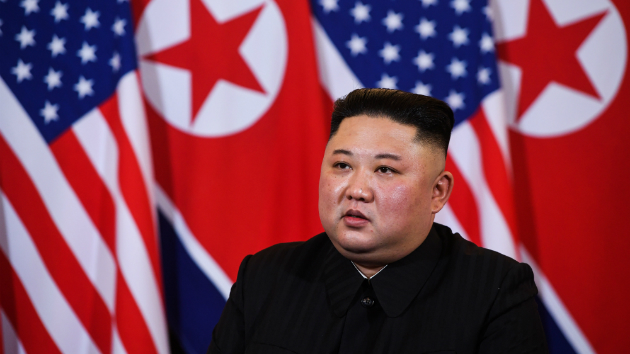 SAUL LOEB/AFP/Getty Images(HANOI, Vietnam) — North Korean leader Kim Jong Un appeared to understand English as he reacted in real time to President Donald Trump's comments, prior to any official translation, during a photo opportunity at the Metropole Hotel in downtown Hanoi on Thursday morning.
Kim could be seen nodding as Trump, speaking in English, mentioned “a lot of great ideas being thrown about” at the previous night’s dinner.
Kim continued to acknowledge with a grin and several nods during Trump's continued remarks about the “very strong” and “good relationship” that the two leaders share, and how North Korea could be an economic powerhouse.
“It is something I look forward to helping with, because with a little bit of help in the right location and the right place, I think it will be something very special,” Trump said.
Kim appeared relaxed, and then immediately smiled as Trump thanked him for “no testing of nuclear rockets, missiles, any of it.”
But then, when Trump repeated a comment he'd made repeatedly during his visit to Vietnam — “I am in no rush" — Kim, clasping hands together with his lips tight, frowned.
An awkward moment followed when Trump asked Kim if he had anything to say.
Kim facing the translator, said simply, "But time is very important to us," apparently contrasting his reaction to Trump's repeated claim that he is in "no rush" to make progress on denuclearization that could lead to an end to crippling sanctions against North Korea.
Kim quickly pivoted, suggesting that to some pessimists, this all may seem like a "fantasy movie".
"I'm sure all of them will be watching the moment we are sitting together, side-by-side, as if they are watching a fantasy movie," Kim said.
Copyright © 2019, ABC Radio. All rights reserved.