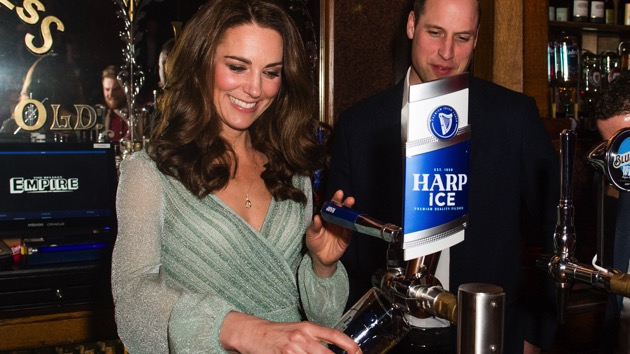 Samir Hussein/Samir Hussein/WireImage(BELFAST, Northern Ireland) — Royals, they're just like us, pouring beer at a pub.
Except that when Kate Middleton, the Duchess of Cambridge, does it, she looks ultra-glamorous.
Duchess Kate, 37, wore a shimmery dress by Missoni in a light shade of Irish green as she took a turn as bartender at the Belfast Empire, a live music venue, in Belfast, Northern Ireland.
Kate and Prince William were each spotted taking their turn pulling a pint of Harp Lager during their stop behind the bar Wednesday.
The fun event, which celebrated young people who are making a difference in Northern Ireland, capped a busy day for William and Kate, who also showed off their athletic skills.
The parents of three took part in outdoor activities including soccer, canoe races and archery during their first day in Northern Ireland.
William and Kate stepped behind the camera Thursday during their visit to Ballymena, Northern Ireland.
Kate joined makeup and storyboard demonstrations with students at Malvern Primary School in Ballymena. She and William also attended a camera demonstration led by students.
The Duke and Duchess of Cambridge are scheduled to end their Northern Ireland tour later Thursday at Sure Start, an organization that "supports parents with children aged under four years old living in disadvantaged areas in Northern Ireland," according to Kensington Palace.
Copyright © 2019, ABC Radio. All rights reserved.