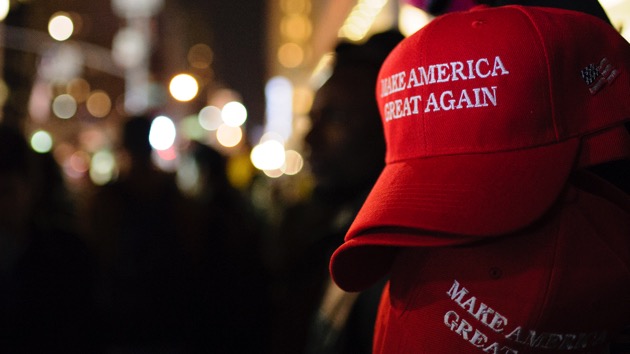 David Cliff/SOPA Images/LightRocket via Getty Images(BOSTON) — Immigration and Customs Enforcement has arrested a woman who allegedly assaulted a man wearing a "Make America Great Again" hat earlier this month.
Rosiane Santos was detained by federal agents after video surfaced on Feb. 15 of her grabbing a man's red cap and throwing it on the floor at a Mexican restaurant in Massachusetts.
Santos, a citizen of Brazil who's in the country illegally, was arrested by U.S. Immigration and Customs Enforcement's Fugitive Operations Team on Monday and was being processed for deportation, immigration officials told ABC Boston affiliate WCVB on Tuesday.
"She has since been released from ICE custody after being entered into removal proceedings in federal immigration courts and provided a Notice to Appear at a future date before an immigration judge," an ICE spokesperson said in a statement.
ICE didn't immediately respond to ABC News' request for comment on matter.
Bryton Turner, the Facebook user who posted the footage, said he was the man targeted by Santos.
"I'm just trying to sit here and eat a nice meal," Turner says in the video as Santos grabs his hat and pulls it over his eyes. "You see this? People like that, that's the problem. That's the problem with America these days."
In a second video, Santos can be seen speaking to two uniformed officers at the restaurant.
"Went out with some friends trying to enjoy some dinner and drinks when this ignoramus randomly tried to hit my hat off and started yelling at me (assault + drunk and disorderly)," Turner wrote in the video's caption. "I wasn't going to press charges, but in front of four cops she did it again, so now she's going to jail."
The Facebook post had racked up more than 2,000 reactions and comments as of early Wednesday.
Turner did not immediately respond to ABC News' request for comment.
Santos was arraigned last week and is expected back in court on March 20.
Her immigration attorney, Katarina Kozakova, said she plans to address the charges against her client in criminal court, according to local new outlet Boston.com.
Kozakova said Santos has a pending green card application and is married to a U.S. citizen.
Copyright © 2019, ABC Radio. All rights reserved.