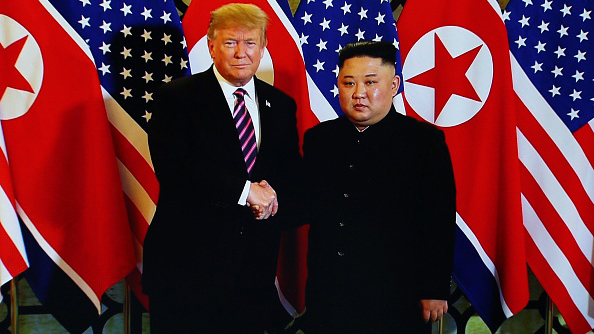 Vietnam News Agency/Handout/Getty Images(HANOI, Vietnam) — President Donald Trump and North Korea's Kim Jong Un are meeting for their second summit in Vietnam, as the U.S. pushes the young leader to abandon his nuclear arsenal in exchange for economic relief and assurances of his security.
Whether or not it's an agreement Kim has any interest in remains the fundamental question at the heart of Trump's summit diplomacy, one that the U.S. intelligence community and North Korea analysts have grave doubts about.
President Donald Trump looks towards North Korean leader Kim Jong Un during the one-on-one bilateral meeting at the second North Korea-U.S. summit in Hanoi, Vietnam, Feb. 28, 2019.
Trump and Kim are meeting at the historic Metropole Hotel in downtown Hanoi, which is 12 hours ahead of Eastern Standard Time, after a brief one-on-one meeting Wednesday and an hour and a half-long dinner with their top aides, including Secretary of State Mike Pompeo and acting White House chief of staff Mick Mulvaney.
The two have another personal meeting, joined only by their translators for 45 minutes, before a nearly two-hour long session with their negotiating teams. In addition to Pompeo and Mulvaney, Trump is expected to be joined by U.S. Special Representative for North Korea Stephen Biegun, who has been in Hanoi for the last week trying to reach an agreement for Trump and Kim to sign in a signing ceremony for a joint agreement, but it's unknown what that document will say.
The last summit in Singapore was criticized for its joint declaration, which committed both countries to pursuing the "complete denuclearization of the Korean Peninsula," a term that was never defined and means very different things to either side.
For the U.S., it's the unilateral disarmament of North Korea, including all its nuclear capabilities, ballistic missiles and chemical and biological weapons. But North Korea has shown no interest in doing so, instead seeking sanctions relief and normalized relations with the U.S. while handing over some small concessions, like inspections or verification of testing sites North Korea claims it has dismantled.
Here's how the day is unfolding:
9:38 p.m.
Following their one-on-one bilateral meeting, Trump and Kim walked together through a courtyard followed by their translators to join Secretary of State Mike Pompeo and Foreign Minister Ri Yong-ho.
9 p.m. (EST)
Trump and Kim are holding a photo op at the Metropole hotel downtown.
Trump briefly spoke about his "good relationship" with Kim ahead of their day of negotiations.
"A lot of good ideas being thrown about," Trump said. "When you have a good relationship a lot of good things happen."
Trump also appeared to downplay the idea that any major action would result from the sit-down meeting, emphasizing that he's "in no rush" and highlighting what he described as significant economic opportunities for North Korea in the event Kim agrees to denuclearize.
"I can't speak necessarily for today, but a little bit longer term and over a period of time I know we’re going to have a fantastic success with respect to Chairman Kim and North Korea," Trump said. "I think it's going to be an economic powerhouse. It is something I look forward to helping with, because with a little bit of help in the right location and the right place, I think it will be something very special."
In a rare moment, Kim entertained a question from a reporter who asked if he was "confident" about the negotiations.
"It's too early to tell," he said. "But I wouldn't say that I'm pessimistic. From what I feel right now, I do have a feeling that good results would come out."
Trump and Kim are scheduled to meet privately for 45 minutes before sitting down with their top diplomatic aides for a more extensive meeting.