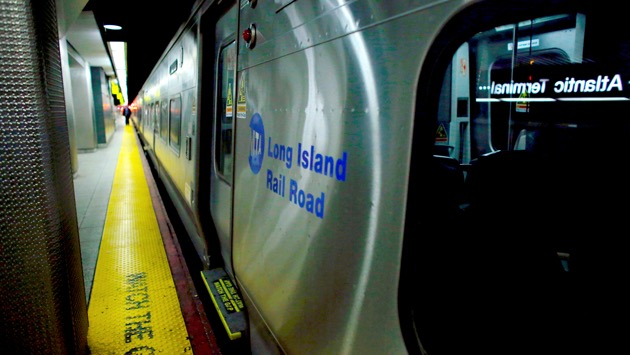 KENA BETANCUR/AFP/Getty Images(WESTBURY, N.Y.) — At least three people were killed in New York on Tuesday when a truck collided with a Long Island Rail Road train, causing it to derail, authorities said.
There were about 800 passengers on board when a truck tried to beat a westbound train at a crossing late Tuesday, killing all three of the vehicle's occupants, authorities said.
"Service remains suspended on the Ronkonkoma and Huntington/Port Jefferson Branches in both directions following a collision between a train and a motor vehicle at the School Street crossing in Westbury," LIRR tweeted late Tuesday. "Police and emergency personnel are on scene."
A dispatcher at Nassau County Traffic Management confirmed to ABC News that at least three people were killed, including at least one of the truck's occupants, but he could not offer additional details.
The LIRR train, which was traveling from Ronkonkoma to New York Penn Station, crashed into the platform and derailed after striking the vehicle.
The fatal accident happened at around 7 p.m. in Westbury, N.Y., about 30 miles east of Manhattan. The crossing is guarded, but the rails were reportedly lowered at the time.
Service was suspended in both directions on the Ronkonkoma and Huntington/Port Jefferson branches in the wake of the accident.
"We advise customers to take alternate branches including the Babylon, Montauk or Hempstead branches. We will provide more information as it becomes available," LIRR officials tweeted. "Crews are en route to asses the situation. We will provide more information as it becomes available."
Authorities say minor injuries were reported among the passengers on board.
Copyright © 2019, ABC Radio. All rights reserved.