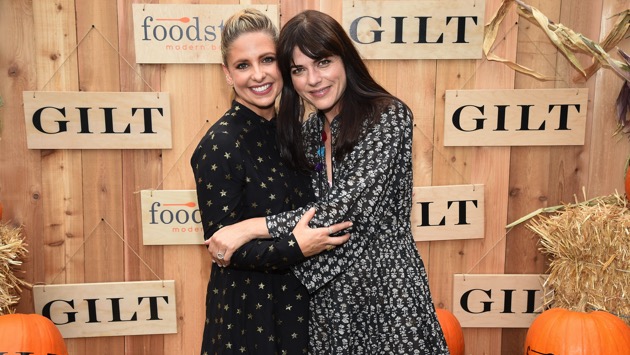 Michael Kovac/Getty Images for GILT(NEW YORK) — After stepping into the spotlight Sunday at the Vanity Fair Oscars after-party, Selma Blair opened up to GMA about the agony she went through before receiving a diagnosis of multiple sclerosis last year.
After her sit-down interview with Robin Roberts, where she detailed suffering an MS flare-up and not knowing what was wrong for years, Blair's former Cruel Intentions co-star and "dear friend" Sarah Michelle Gellar took to social media to pay tribute to the brave actress.
"This is my dear friend @selmablair Last night she stood on the world stage for the first time, since being diagnosed with MS," Gellar wrote Tuesday about her Oscars appearance.
Gellar continued, "To say I’m proud, would be a gross understatement."
Gellar joked that when she is sick, she hides "from the world under my covers."
"But not Selma. She is facing this diagnosis, the way she faces everything, with dignity, grace and head on," she added. "I know the support and encouragement that she has received on this platform has truly been a source of strength for her. This is not an easy journey, but Selma will not let this define her."
During her GMA interview, Blair, 46, said that after her son was born, she just didn't know what was ailing her and began to cope in other ways after doctors didn't take her pain seriously.
"I was self-medicating when he wasn't with me," she said of her newborn son. "I was drinking. I was in pain. I wasn't always drinking, but there were times when I couldn't take it. I was really struggling with, 'How am I gonna get by in life?' And [being] not taken seriously by doctors, just, 'Single mother, you're exhausted, financial burden, blah, blah, blah.'"
Not knowing what is wrong with you can be the scariest thing any person can deal with, so after she was finally diagnosed with MS, Blair said she cried in relief.
"Like, 'Oh, good, I'll be able to do something,'" she added. "They were tears of knowing I now had to give in to a body that had loss of control, and there was some relief in that."
Blair originally revealed her diagnosis last October, taking to Instagram to simply write, "I have #multiplesclerosis. I am in an exacerbation. By the grace of the lord, and will power and the understanding producers at Netflix, I have a job. A wonderful job. I am disabled. I fall sometimes. I drop things. My memory is foggy. And my left side is asking for directions from a broken gps. But we are doing it."
Copyright © 2019, ABC Radio. All rights reserved.