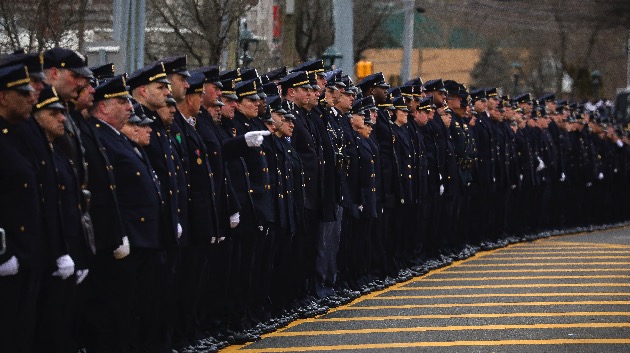 Drew Angerer/Getty Images(NEW YORK) — Two weeks after NYPD Detective Brian Simonsen died by friendly fire, investigators have been unable to determine which officer fired the shot that killed him, an NYPD spokesman told ABC News.
The round that struck Simonsen was recovered but "the ballistics examination was inconclusive," meaning "we are not able to determine which firearm it came from," the spokesman said.
Body camera and surveillance video showed several officers in position to have fired the fatal shot but the images did not show which one did, a police source added.
Simonsen, 42, an 18-year veteran, was shot and killed on Feb. 12 while responding to an armed robbery at a Queens T-Mobile store.
Simonsen's partner, Sgt. Matt Gorman, and two officers who set foot in the store quickly retreated when police said the suspect, Christopher Ransom, pointed an imitation handgun at them.
In a chaotic scene that unfolded within seconds, seven officers shot 42 rounds, authorities said.
Simonsen, who did not have a bulletproof vest on, was fatally hit once in the chest, authorities said.
Gorman was shot and wounded.
Ransom and his alleged accomplice, Jagger Freeman, have been charged with felony murder. Both have denied the allegations.
"All of the police officers at that tragic shooting will carry their grief with them for the rest of their lives," Police Commissioner James O’Neill said at the detective's funeral. "Those cops responded to a call for help. They did not hesitate. And they are not to blame."
"The two people responsible for Brian’s death — the only two — are the career criminals who decided to go to that store on Tuesday night and commit an armed robbery," O'Neill said.
Simonsen was his precinct's union delegate and attended a union meeting on the day of his death, authorities said. He decided to respond to the call in Queens even though he didn't have to, authorities said.
The fallen detective lived on Long Island but drove nearly 70 miles each way so he could work in Queens.
"He fell in love with his community and the community fell in love with him," O’Neill said.
"Being an NYPD cop is what Brian dedicated his life to for 18 years, 11 months and 12 days," spending his entire career at the 102nd Precinct, O’Neill said.
Simonsen is survived by his mother, Linda, and his wife, Leanne, a nurse.
"To Leanne and Linda, and to all of Brian’s loved ones, know this: Our family is your family," O'Neill said at the funeral.
Copyright © 2019, ABC Radio. All rights reserved.