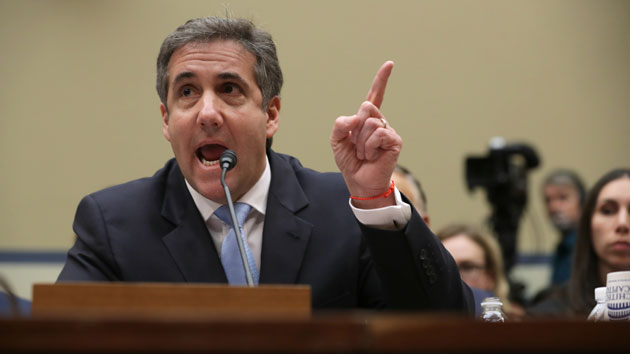 A warning from Warren
While many congressional hearings and confirmations in the past few months have doubled as 2020 campaign platforms, the House Oversight and Reform Committee is relatively devoid of presidential candidates.
But in today's politics, the next election is never far.
As Cohen testified, Democratic Sen. Elizabeth Warren – one of the first 2020 candidates to declare a bid – sent out a promise to supporters: If she's elected, "there will be no pardons for anyone implicated in these investigations."
Warren promised no pardons or commutations for anyone charged in the Mueller investigation, anyone implicated in a federal criminal investigation related to Trump, and "no pardon or commutation for Donald Trump himself."
Cohen draws comparisons to himself and the Republicans standing by Trump
About two hours into a hearing filled with blatant partisan divide, quips from all sides and testy one-liners – "The record reflects that you're not a nice guy," Republican Rep. Mark Meadows of North Carolina told Cohen – the president's former fixer called members of Congress out for the combative behavior in an unusual way: by taking responsibility for it.
"It's that sort of behavior that I'm responsible for. I'm responsible for your silliness because I did the same thing that you're doing now for ten years," Cohen said.
"I protected Mr. Trump for ten years," Cohen said.
The president's former personal attorney was responding to a question from Rep. Jim Cooper, a Democrat from Tennessee, about what caused Cohen to flip — to "start telling the truth."
In answering, Cohen named the president's reaction to a white nationalist rally in Charlottesville. He added, "Watching the daily destruction of our civility to one another."
Cohen warned Republicans, who he saw as defending the president, to take note of his current position: "The more people that follow Mr. Trump as I did, blindly, are going to suffer the same consequences that I'm suffering."
Blast from the past
Cohen asked for a break after his questioning with Cooper. And just as Cohen stepped away from the cameras, the one-and-only Anthony Scaramucci piped up with his reaction to the beginning of the testimony.
Scaramucci, who spent 11 days as Trump's communication chief before a sharp exit, had a message for D.C.: it "sucks," he said.
It wasn't clear who, exactly, Scaramucci was referring to.
The president, who has a 12-hour time difference while in Vietnam, has yet to chime in on the hearing – but did retweet himself at the beginning of the testimony.
"He is lying in order to reduce his prison time," Trump tweeted.
Cohen opens with admissions of guilt and a promise to tell the truth
Cohen’s 30-minute opening statement was rife with emotion — a detailed thread of the lies and offensive rhetoric then-candidate and now-President Trump allegedly used, interlaced with Cohen’s own admission that he continued, again and again, to participate in acts he knew were wrong, and at times, unlawful.
One of those moments, Cohen said, now holds great irony.
"Mr. Trump tasked me to handle the negative press surrounding his medical deferment from the Vietnam draft," Cohen said. "Mr. Trump claimed it was because of a bone spur. But when I asked for medical records, he gave me none and said that there was no surgery. He told me not to answer the specific questions by reporters, but rather offer simply the fact that he received a medical deferment. He finished the conversation with the following comment, 'you think I'm stupid, I'm not going to Vietnam.'"
"And I find it ironic, Mr. President, that you are in Vietnam right now," Cohen said.
"And yet I continued to work for him," Cohen said.
Cohen choked up when he spoke about his wife, Laura, and his nearly-grown children, Sami and Jake, who he said he would do anything to protect.
"As my father said countless times throughout my childhood, you, my wife, and you, my children, are the air that I breathe," Cohen said.
Cohen detailed moments he regretted — like lying to first lady Melania Trump allegedly at the president’s direction, he said.
“He asked me to pay off an adult film star with whom he had an affair and to lie about it to his wife, which I did. And lying to the First Lady is one of my biggest regrets, because she is a kind, good person, and I respect her greatly. And she did not deserve that,” Cohen said.
Cohen cataloged times he picked up on what he claims were developments for a now-infamous Trump Tower meeting — including a chat between the president and his son, Don Jr., who Trump allegedly said "had the worst judgment of anyone in the world," according to Cohen.
“What struck me as I look back and thought about the exchange between Don Jr. and his father was, first, that Mr. Trump had frequently told me and others that his son Don Jr. had the worst judgment of anyone in the world, and also that Don Jr. would never set up any meeting of significance alone, and certainly not without checking with his father,” Cohen said.
“I also knew that nothing went on in Trump World, especially the campaign, without Mr. Trump's knowledge and approval. So I concluded that Don Jr. was referring to that June 2016 trump tower meeting about dirt on Hillary with the Russian representatives when he walked behind his dad's desk that day,” Cohen said.
Cohen closed by owning up to his past and promising not to lie, again, before members of Congress.
“For those who question my motives for being here today, I understand,” Cohen said.
“I have lied, but I am not a liar. I have done bad things, but I am not a bad man. I have fixed things, but I am no longer your fixer, Mr. Trump. And I am going to prison and have shattered the safety and security that I tried so hard to provide for my family,” Cohen said.
Word of the Day?

A few hours before the long-anticipated hearing got underway, Merriam Webster — which has frequently spell-checked the president — offered this Tweet:
"Word of the Day? Grift — to obtain money illicitly."

The hearing kicked off with a move by Republicans, led by Trump ally Rep. Mark Meadows of North Carolina, to postpone the hearing because Cohen’s testimony was not delivered 24-hours ahead of time — a procedural sticking point that Republicans said proved Cohen wasn't following the rules.
"It was an intentional effort by this witness and his advisors to once again show his disdain for this body," Meadows said.
The hearing continued after a vote, which fell along party lines and gave the majority to the Democrats.
"You've made it clear that you do not want the American people to hear what Mr. Cohen has to say, but the American people have a right to hear him. So we're going to proceed. The American people can judge his credibility for themselves," Democratic Chairman Rep. Elijah Cummings said.
Democrats, who acknowledged Cohen's scarred history and upcoming prison time, sought to give Cohen a platform to share his side of the story with the country. Republicans repeatedly called on Cohen's history of lying to Congress – one of the crimes he is going to prison for – as proof that he could not be taken at his word.