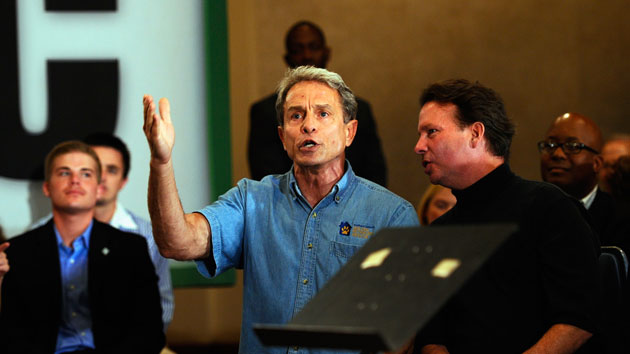 Kevork Djansezian/Getty Images(LOS ANGELES) — The mother of a man who was found dead in a Democratic donor's apartment nearly two years ago has now filed a wrongful death lawsuit against the donor and city officials in Los Angeles.
Gemmel Moore was found dead in the apartment of Ed Buck on July 27, 2017.
Moore's mother, Latisha Nixon, is suing Buck along with the Los Angeles County District Attorney and the county's assistant head deputy district attorney.
Moore was the first of two men who were found dead in Buck's apartment. The second man, later identified as Timothy Dean, died this January. His death prompted the Los Angeles sheriff's department to investigate as well as revisit the investigation into Moore's death.
The Los Angeles sheriff's office said in January that Buck, who has a history of donating to Democratic causes, was at the apartment when both men died.
In addition to wrongful death, Nixon's suit goes on to list 10 additional causes of action, including sexual battery, assault, battery, hate violence, drug dealer liability, negligence, intentional infliction of emotional distress and civil rights violations.
The attorney for Buck, Seymour Amster, issued a statement Wednesday maintaining his innocence.
"On behalf of Mr. Buck we categorically deny all allegations of wrongdoing and look forward to litigating this matter in a court of law," Amster told ABC News.
Amster told KABC in January that Dean's death was "a situation where Mr. Buck has had longtime friends who unfortunately do not handle their life well."
The Los Angeles County District Attorney's Office declined to comment.
Moore's death was originally ruled an accidental methamphetamine overdose when the sheriff's department investigated Moore's death in 2017.
The Los Angeles Sheriff's Department confirmed to ABC News that the investigation into both Dean's and Moore's deaths is ongoing.
According to Nixon's lawsuit, Moore "died after being injected with a lethal dose of crystal methamphetamine at the hands of Edward Buck, a wealthy older white man who has a well-documented history of isolating black men for predatory sexual encounters during which he injects them with crystal methamphetamine in the confines of a drug den in his West Hollywood apartment."
Buck's apartment was described in Moore’s autopsy report as "littered with multiple syringes with brown residue, a scale, several lighters and torches, a straw with white residue, glass pipes with white residue and burn marks, plastic bags with white powdery residue and a clear plastic bag containing a crystal-like substance," the suit says.
"Mr. Buck had previously solicited sex from Mr. Moore on numerous occasions. During previous encounters, Mr. Buck would insist upon injecting Mr. Moore with crystal methamphetamine," the suit states.
Copyright © 2019, ABC Radio. All rights reserved.