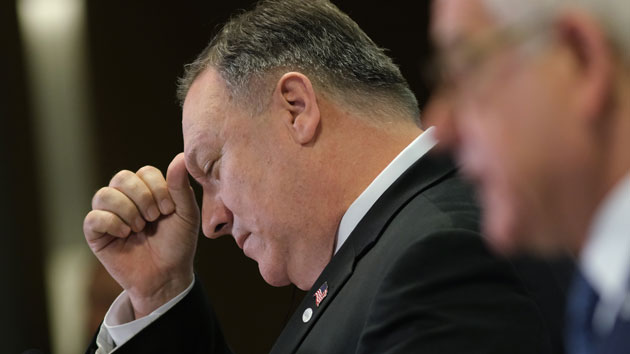 Sean Gallup/Getty Images(LONDON) — Secretary of State Mike Pompeo called for "restraint" after two Indian jets flying in Pakistani territory were shot down Wednesday morning by the Pakistani military. Tensions continue to rise between the two nuclear powers over the disputed region of Kashmir.
After speaking to both the Indian and Pakistani ministers for foreign affairs earlier in the day, Pompeo said in a statement that he "expressed to both ministers that we encourage India and Pakistan to exercise restraint, and avoid escalation at any cost.”
Maj. Gen. Asif Ghafoor, a spokesman for Pakistan's military, confirmed on Twitter that Pakistan Air Force's shot down the jets.
One of the aircraft fell inside Pakistani territory and the other was grounded in Indian-controlled territory, Ghafoor said. One Indian pilot was arrested and taken into custody and is "being treated as per norms of military ethics," the military spokesman said.
The Indian aircraft entered Pakistani airspace after the Pakistan Air Force undertook “strikes” across the Line of Control, the border between Pakistani and Indian-controlled Kashmir, according to the Pakistan Ministry of Foreign Affairs. These airstrikes were launched against "non-military" targets, which were mostly empty areas, Asad Ali, a senior analyst for IHS Markit, told ABC News.
Mohammad Faisal of the Pakistan Ministry of Foreign Affairs posted on Twitter that the “sole purpose of this action was to demonstrate our right, will and capability for self defence.”
Pakistan’s ministry of information also released a video which appears to show the downed jets and a number of military personnel on the scene.
Conflicting reports

The escalation in tensions comes after the Indian Air Force said it carried out an airstrike on Jaish-e Mohammad militants in Pakistani territory this week. The Indian government has blamed the militant group for a suicide bomb attack that killed 40 Indian security personnel in Kashmir on Feb. 14. India has accused Pakistan of harboring the militant group, a claim Pakistan denies.
In a meeting with the foreign ministers of Russia and China, India's external affairs minister, Sushma Swaraj, said the airstrike on Monday was carried out “in the light of continuing refusal of Pakistan to acknowledge and act against terror groups on its territory.”
“The Pakistan Air Force was detected and the Indian Air Force responded instantly,” the Indian government said in a statement. “In that aerial engagement, one Pakistan Air Force fighter aircraft was shot down by a MiG 21 Bison of the Indian Air Force. The Pakistani aircraft was seen by ground forces falling from the sky on Pakistan side. In this engagement, we have unfortunately lost one MiG 21. The pilot is missing in action. Pakistan has claimed that he is in their custody. We are ascertaining the facts.”
The conflict between the two sides is characterized by contradictory official reports. On Tuesday, India claimed it had killed a “very large number” of Jaish e-Mohamed militants while the Pakistani military spokesperson said there were no casualties and the jets were successfully scrambled.
“This kind of misinformation, backed up by each country’s noisy media, is a useful strategy that allows both sides to claim victory,” Elizabeth Chatterjee, a lecturer in regional and comparative politics at Queen Mary University in London, told ABC News.
This is the first aerial battle between the two nations since their war of 1971. Since then both Pakistan and India have become nuclear powers.
Pakistan's minister of finance, Asad Umar, accused Indian Prime Minister Narendra Modi of "a mad attempt to pitch two nuclear nations in a conflict."
"I hope there are no questions left about Pakistan's capability and will to defend itself now," he posted on Twitter. "Hope the sane voices in India will be able to stop narendra modi's mad attempt to pitch two nuclear nations in a conflict that no sane person can want."
Copyright © 2019, ABC Radio. All rights reserved.