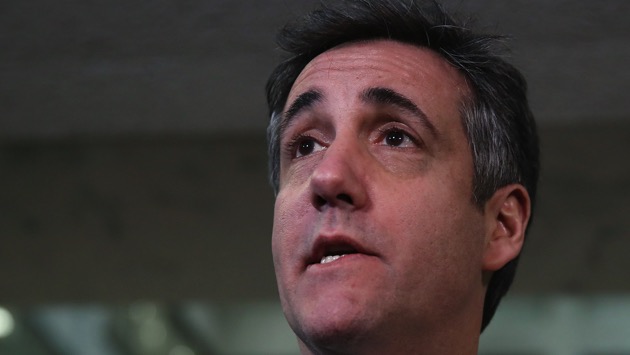 Mark Wilson/Getty Images(WASHINGTON) — Michael Cohen, President Donald Trump's former lawyer and fixer, will testify publicly for the first time Wednesday about his experience in the Trump orbit before the House Oversight Committee, and is expected to paint an unflattering portrait of the president as an unscrupulous businessman who may have committed a crime while in office.
Cohen, according to a copy of his intended remarks obtained by ABC News, also plans to divulge that Trump, as a candidate, knew his longtime confidant Roger Stone was talking with Julian Assange about WikiLeaks' revealing of emails from the Democratic National Committee.
As he left his hotel Wednesday morning, staff and hotel guests greeted and wished him well, some hugging him and people saying “God bless you.”
“I’m going to do the right thing,” Cohen said. He also called it “the craziest day” of his life.
Cohen, who spent a decade at Trump's side at the Trump Organization, will testify before House lawmakers at 10 a.m. Wednesday as President Trump wraps up his first day of meetings with North Korean leader Kim Jong Un in Vietnam.
Cohen is scheduled to begin a three-year prison sentence in May and has pleaded guilty to lying to Congress as well as financial crimes including bank and tax fraud. Cohen also pleaded guilty to campaign finance violation for payments made to adult film star Stormy Daniels during the 2016 presidential campaign.
The White House, along with Republicans on Capitol Hill, have sought to discredit Cohen ahead of his appearance.
"Disgraced felon Michael Cohen is going to prison for lying to Congress and making other false statements," White House Press Secretary Sarah Sanders said Tuesday in a statement. "Sadly, he will go before Congress this week and we can expect more of the same. It's laughable that anyone would take a convicted liar like Cohen at his word, and pathetic to see him given yet another opportunity to spread his lies."
Rep. Matt Gaetz, R-Fla., a staunch Trump ally, also tweeted Tuesday that the hearing could reveal alleged details about Cohen's romantic life, prompting outrage from Democrats and ethics experts.
The stakes are also high for Democrats in the House, who have vowed to investigate the president and conduct oversight of the administration amid accusations of overreach from Republicans.
House Oversight Committee Chairman Elijah Cummings, D-Md., suggested the hearing "may very well be a turning point in our country's history."
"He's the only person that I know of who has accused this president of a crime," he told reporters on Monday.
Cohen is prepared to provide lawmakers with documents to support his claims that Trump allegedly inflated and deflated his net worth for personal professional gain, and to avoid paying property taxes, according to a source familiar with his intended testimony.
He will also share personal anecdotes from his time with Trump to accuse him of making racist comments, lying and cheating as a businessman.
The president's former fixer is also expected to explain why he lied to Congress in 2017 about discussions he had during the presidential campaign about proposed the Trump Tower Moscow.
His specific allegation of criminal wrongdoing relates to Trump's reimbursement to Cohen for the payment to adult film actress and director Stormy Daniels, who alleged an affair with Trump, according to the source familiar with Cohen's planned testimony.
Trump has denied the affair alleged by Daniels and another accusation from former Playboy model Karen McDougal and has previously said the payment amounted to nothing more than a "simple private transaction," and that they do not qualify as campaign finance violations.
Cohen will appear before the House Oversight and Reform Committee after postponing an initial hearing date, citing "threats" to his family by Trump and his lawyer Rudy Giuliani.
On Tuesday he spent hours behind closed doors with the Senate Intelligence Committee and will meet with the House Intelligence Committee in private on Thursday.
"Two years ago when this investigation started, I said it may be the most important thing I'm involved in my public life in the Senate," Sen. Mark Warner, D-Va., the top Democrat on the panel, told reporters after the panel questioned Cohen. "Nothing I have heard today dissuades me from that view."
Democrats are carefully coordinating their questioning for Wednesday's hearing after consulting with the office of the U.S. attorney for the Southern District of New York and the Justice Department to make sure the public hearing doesn't broach topics under investigation by special counsel Robert Mueller, according to committee aides.
Republicans on the panel plan to question Cohen's truthfulness before Congress in light of his recent guilty plea for lying to lawmakers, and they have accused Democrats of bringing him to testify publicly to justify launching an impeachment investigation against the president.
"We will call out the Democrats' charade for what it is — a partisan circus meant to destroy President Trump," Reps. Jim Jordan, R-Ohio, and Mark Meadows, R-N.C., said in a USA Today editorial.
At Cohen's sentencing hearing in December, special counsel Robert Mueller's team said Cohen had cooperated with their investigation.
Lawmakers are expected to question Cohen on Wednesday in five-minute intervals, alternating between Democrats and Republicans in at least one round of questioning that could span several hours, according to committee aides. The marquee hearing may stop briefly for lunch or any House floor votes.
Ahead of the hearing, during his day with the Senate Intelligence Committee, Cohen was officially disbarred as a lawyer in New York, according to a decision from the Appellate Division of the New York State Supreme Court expected after his November guilty plea.
Copyright © 2019, ABC Radio. All rights reserved.