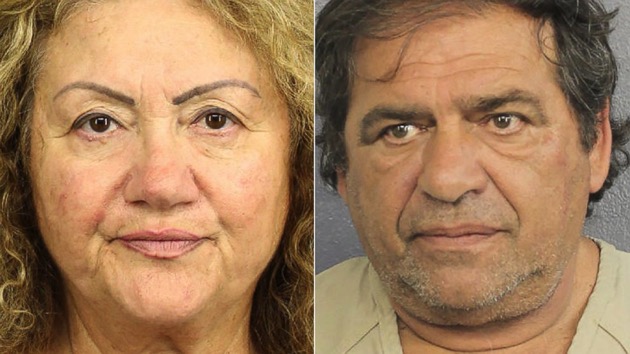 (Broward Sheriff's Office) Ida Shafir and Nick Bogomolsky in booking photos.(FORT LAUDERDALE, Fla.) — A man and a woman were arrested at a Florida airport following a luggage dispute that delayed a flight and sent two sheriff's deputies to the hospital, authorities said.
The incident unfolded as Ida Shafir, 67, and her companion, Nick Bogomolsky, 61, were attempting to board their Delta Air Lines flight at the Fort Lauderdale–Hollywood International Airport on Tuesday morning.
Airline agents announced over the loud speaker that passengers would have to check all carry-on luggage at the gate, free of charge, in order to board the New York-bound plane because it was full. But Shafir "refused to check [her] luggage" and caused "a commotion at the gate," according to the complaint affidavit.
An airline agent took the pair aside on the jet bridge and explained they would have to check their bags prior to boarding the flight. The agent then contacted her manager, who arrived and noticed that Bogomolsky had three items, more than the one-carry-on, one-personal-item permitted in the plane's cabin, the affidavit said.
The manager "felt the safety of the plane and the other passengers was in jeopardy if he would allow Bogomolsky and Ida to board," so he told them they wouldn't be allowed to board and needed to leave the jet way, according to the affidavit.
The airline agents contacted authorities for assistance after the pair "refused to leave." Two deputies from the Broward County Sheriff's Office arrived on scene and tried to deescalate the situation. One deputy explained to Shafir she needed to leave or she would be arrested, and Shafir dared the deputy to arrest her, the affidavit said. The deputy attempted to handcuff Shafir but she "got out of control and resisted arrest by tensing, bracing and pulling her hands away from him," according to the complaint affidavit.
The struggle went to the ground and Shafir bit the deputy on his left forearm, drawing blood. Then Bogomolsky pushed the second deputy out of his way and tried to grab a firearm from the holster of the deputy who was on the floor with Shafir, the affidavit said. As the second deputy attempted to regain control of Bogomolsky, the two ended up on the ground as well, causing the second deputy to injure his right knee and his right thumb, according to the affidavit.
Both deputies were transported to a local hospital.
Shafir continued resisting arrest until multiple deputies arrived on scene and were able to handcuff her. Bogomolsky was taken into custody. The incident delayed the Delta Air Lines flight and disrupted normal operations, according to the complaint affidavit.
Shafir, who lives in Brooklyn, was charged with battery on a law enforcement officer, resisting arrest with violence and trespassing. Bogomolsky, who also lives in Brooklyn, was charged with robbery, resisting arrest with violence, trespassing after warning and obstructing police, according to the complaint affidavit.
Copyright © 2019, ABC Radio. All rights reserved.