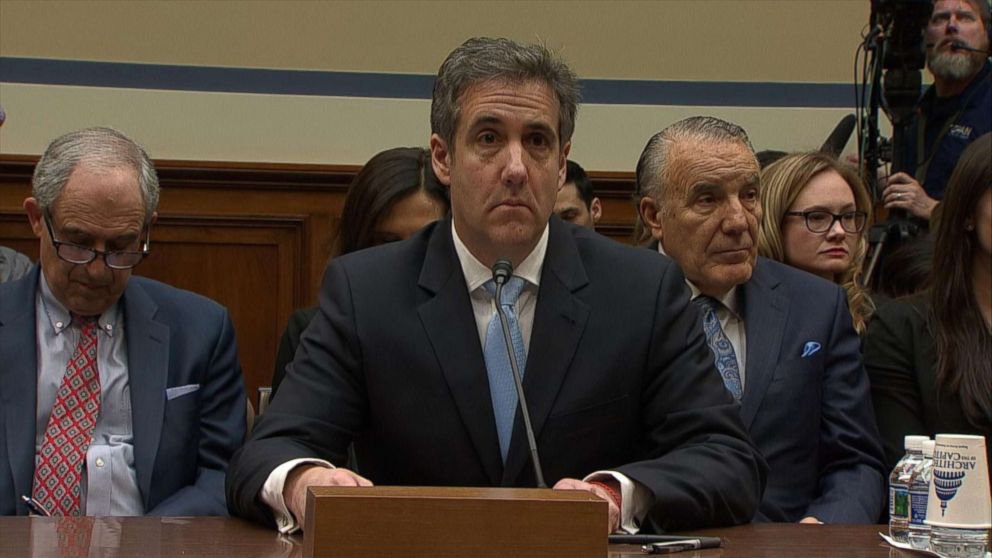 ABC News(WASHINGTON) — Republican lawmakers came out swinging Tuesday against President Donald Trump's former lawyer Michael Cohen, accusing the one-time "fixer" of being an attention-seeking "pathological liar" who was looking to land a book deal.
The GOP lawmakers depicted the hearing as a circus orchestrated by Hillary Clinton's allies, and at one point even invited an administration official who is African American to stand behind Rep. Mark Meadows as he questioned Cohen's assertion that Trump was "racist."
Donald Trump Jr. even compared Cohen's testimony to that of a jilted lover.
"This sounds like a breakup letter… and I’m keeping your sweatshirt," Trump Jr. tweeted.
The tactics were aimed at blunting the impact of Cohen's testimony, which could be deeply damaging to the president's brand. Cohen, who has been disbarred as a lawyer, described with remorse writing threatening letters on Trump’s behalf and spending much of a decade devoted to protecting “a conman” and “a cheat.”
Conservatives though said they weren't buying it and noted repeatedly that Cohen had been convicted for lying to Congress.
"Liar, liar, pants on fire," said. Rep. Paul Gosar, R-Ariz. "No one should ever listen to you and give you credibility. It's sad."
Quipped Ohio Republican Jim Jordan: "It's certainly is the first time a convicted perjurer has been brought back to be a star witness in a hearing."
Ahead of the testimony, GOP leaders circulated talking points that documented in detail every time Cohen had been caught making a misstatement and noted that even prosecutors had at one point noted, "his instinct to blame others is strong."
They also invoked Clinton's presence: Cohen's lawyer, Lanny Davis, is closely tied to the former Democratic presidential candidate.
"Cohen is going to prison for lying under oath to Congress and no one should believe a word he says in his testimony this week," according to "messaging" provided Republican members on Tuesday. "Democrats have scheduled this week’s meetings as a way to distract Americans from the historic achievements happening in this Administration."
Trump himself helped to set the tone ahead of the hearing, noting in a tweet that Cohen was "using Crooked’s lawyer!" – an apparent reference to his nickname for Clinton during the campaign.
Rep. Mark Meadows, R-N.C., pressed Cohen on the allegation that Trump is "racist" and referenced Lynne Patton, a Trump administration official who is an African-American woman, as an apparent attempt at rebutting Cohen's claim.
"She says that as a daughter of a man born in Birmingham, Alabama, that there is no way that she would work for an individual who was racist," said Meadows. "How do you reconcile the two of those?"
Cohen's response: "And neither should I as the son of a Holocaust survivor."
But while Republicans came out swinging, they also had to walk a tightrope under House ethics rules. One Democrat has asked the House Ethics Committee to investigate a tweet from Republican congressman Matt Gaetz that appeared to threaten Cohen. Gaetz later apologized and deleted the tweet.
“Hey @MichaelCohen212 – Do your wife & father-in-law know about your girlfriends? Maybe tonight would be a good time for that chat. I wonder if she’ll remain faithful when you’re in prison. She’s about to learn a lot…” tweeted Gaetz.
Gaetz attended the hearing with the hopes of being able to question Cohen, he told ABC News, although he was not allowed.
Republicans tried early on to block the testimony. Meadows demanded that the testimony be postponed until Republicans had an opportunity to review evidence submitted at the last minute.