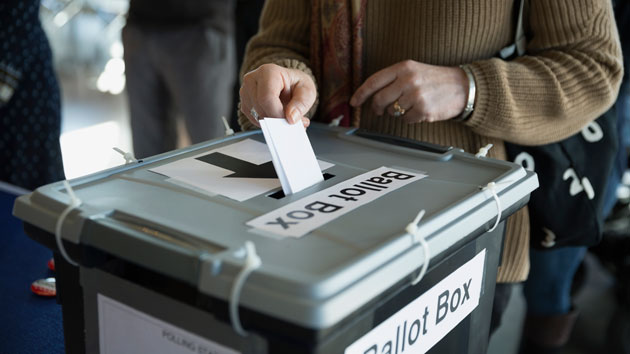 Hero Images/Getty Images(NEW YORK) — Leslie McCrae Dowless, a figure at the center of North Carolina's 9th Congressional District election fraud scandal, was indicted by a grand jury Wednesday on charges of obstruction of justice, conspiracy to obstruct justice, and possession of absentee ballots.
The Wake County District Attorney's Office announced the charges Wednesday afternoon, the week after the state board of elections ordered a new election be held in North Carolina's 9th Congressional District.
The charges were brought after a presentation of "evidence gathered during the investigation into absentee ballot irregularities in Bladen County during the 2016 General Election and the 2018 Primary Election," according to Wake County District Attorney Lorrin Freeman, who notes that the investigation into Dowless activities and irregularities in the 2018 general election is still ongoing.
The charges also come a day after Mark Harris, the Republican candidate who hired Dowless as a political consultant on his congressional campaign, announced that he will not run in the new election ordered by the state board.
Freeman also said she has met with the North Carolina State Board of Elections and that officials there anticipate that their investigation will be completed "within the next thirty days."
Dowless has been arrested and is being transported to the Wake County Detention Center in Raleigh, and his bond is set at $30,000.
When contacted by ABC News, attorneys for Dowless offered a "no comment," when asked about the charges.
Dowless' activities became the center of a months-long investigation that culminated in an intense, emotional public hearing last week that ended with the state board of elections unanimously voting to hold a new election in the state's 9th Congressional District due to the widespread nature of the fraud alleged.
Dowless did not testify at the hearing after the board refused to grant him immunity in exchange for his testimony.
Harris continually denied any knowledge of an illegal scheme run by Dowless, who he said assured him that he was running an absentee ballot program that complied with state law.
However in a stunning reversal at last week's hearing, just hours before the board's decision, Harris said that he believed a new election should be ordered.
"Neither I nor any of the leadership of my campaign were aware of or condoned the improper activities that have been testified to in this hearing," Harris said. "Through the testimony, I've listened to over the past three days, I believe a new election should be called. It has become clear to me that the public's confidence in the 9th District's seat general election has been undermined to an extent that a new election is warranted."
In a statement released on Tuesday, Harris said he will not run in the new election in North Carolina's 9th district, citing recent health issues.
"Given my health situation, the need to regain full strength, and the timing of this surgery the last week of March, I have decided not to file in the new election for Congressional District 9," Harris wrote.
In his statement outlining his reasons for not running, Harris endorsed Union County Commissioner Stony Rushing.
Harris' Democratic opponent in 2018, U.S. Marine Corps veteran Dan McCready, announced last week that he will be running the new election.
"I am running in the special election to represent the people of the 9th District," McCready told supporters. "I want to say right now that we are in this fight and we are going to win this fight."
Copyright © 2019, ABC Radio. All rights reserved.
Copyright © 2019, ABC Radio. All rights reserved.