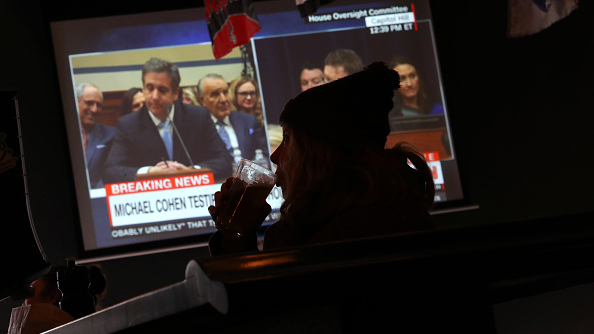 Win McNamee/Getty Images(WASHINGTON) — All over the District of Columbia, people gathered in their neighborhood taprooms Wednesday as spectators to the day’s big event.
It wasn’t the Superbowl or the World Series.
It was Michael Cohen’s testimony to the House Oversight Committee.
Several bars had thought ahead, taking to social media to promote watch parties, and making sure their doors were open by the 10 a.m. (though D.C. law prevented them from serving booze before 11 a.m.)
Cohen, President Donald Trump’s former personal lawyer and fixer, testified before the House Oversight Committee Wednesday.
Cohen is scheduled to begin a three-year prison sentence in May and has pleaded guilty to lying to Congress as well as financial crimes including bank and tax fraud. Cohen also pleaded guilty to campaign finance violation for payments made to adult film star Stormy Daniels during the 2016 presidential campaign.
On Tuesday, Cohen was disbarred in New York.
Around mid-morning, Trent Allen, another co-owner of Midlands, said he hadn't been surprised by anything in Cohen's testimony so far.
But, he added, "Honestly nothing surprises me here anymore," Allen said.
Midlands, which is in the Parkview neighborhood, opened at 10 a.m. Wednesday to show the hearing. Midlands' Twitter account suggested customers bring food from a nearby deli, "sign into our Wifi and watch Cohen spill all the beans!"
Around 11:30 a.m., patrons gave snaps after a committee member asked a particularly tough question.
At Shaw’s Tavern (in the Shaw neighborhood) laughter broke out at a reference to President Donald Trump’s alleged efforts to prevent the College Board from releasing his grades and test scores.
Rob Heim, Shaw's Tavern's general manager, said he wanted his bar to be the place in the neighborhood where people can watch the political fireworks while sipping cool brews. When James Comey testified to Congress, it drew crowds to the tavern.
"You would’ve thought we were showing the Superbowl or something," Heim said. "Every seat was full and people were looking in the windows to try and catch a glimpse of what was going on."
He added, "back a year ago I think people were more interested in what’s going on. I think there’s just so much going on in the political climate that some people just don’t want to watch anymore."
James Bathurst, a personal trainer, came to Shaw's Tavern to watch Cohen's testimony Wednesday.
"There’s a lot of things we see floating around and I think that Cohen has the ability to connect those dots," Bathurst said, a little after 10 a.m. "I’m glad these things are out in the open and the American public can hear what he has to say. So again, we don’t have to make final judgment today, but it’s good that this information and his story is out there."
He said he also viewed Comey's testimony at Shaw's Tavern.
"I got here maybe a half hour before the Comey hearing started and I was maybe 50 people down the street," Bathurst said.
Logan Tavern, near Logan Circle, also opened early Wednesday, advertising a "Cohen-geddon" watch party on its website.

Golden Globes 2021: ‘Borat’ star Sasha Baron Cohen wins Best Actor, Motion Picture Musical or Comedy
‘A hidden figure no longer’: NASA officially names DC headquarters after Mary W. Jackson
Michael Cudlitz on getting to know his character, and escaping COVID, with ‘Clarice’
Vivek Murthy to talk about his own family lost to the pandemic in nomination hearing
Michael B. Jordan admits Chadwick Boseman’s death is what “made me cry the most this year”
As COVID-19 turns more children into orphans, siblings step up to fill the void