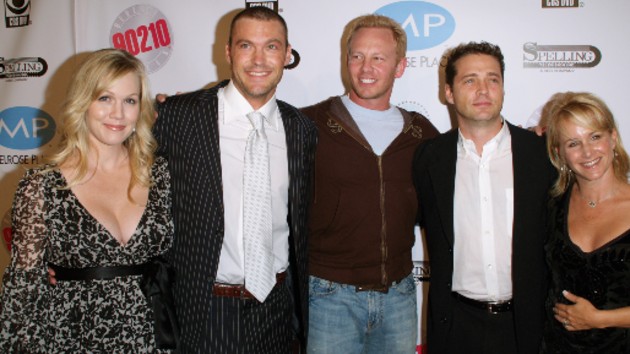 Michael Tran/FilmMagic(BEVERLY HILLS) — Beverly Hills, 90210 fans, rejoice — the show is coming back…with the original cast. But before you book the Peach Pit for your celebratory bash, you need to know a few things.

Yes, Jason Priestley, Jennie Garth, Ian Ziering, Gabrielle Carteris, Brian Austin Green and Tori Spelling are all returning to Fox for this six-episode event series, which is called 90210. But they're not playing their characters: They're playing themselves…albeit "heightened versions" of themselves.

The premise of the show is this: 19 years after the original series ended, all the actors get back together because they decide it's time for a reboot. But as they try to get the new show off the ground, old feelings — good and bad — surface, and all of a sudden, the really interesting drama is taking place off screen.

As Fox says, "What will happen when first loves, old romances, friends and frenemies come back together, as this iconic cast – whom the whole world watched grow up together – attempts to continue from where they left off?"

The new series will air this summer.