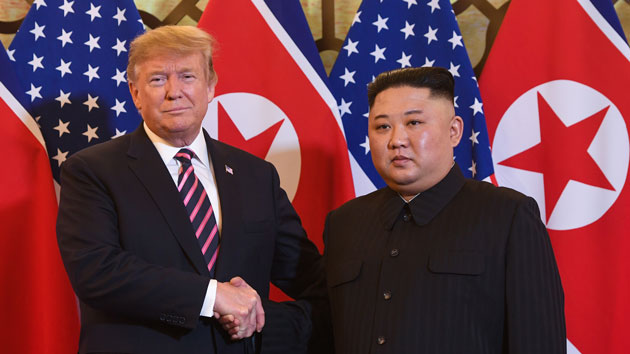 Saul Loeb/AFP/Getty Images(HANOI, Vietnam) — Beyond denuclearization and a transformation of relations on the Korean peninsula, President Donald Trump after his summit with North Korean leader Kim Jong-Un may be hoping for the Nobel Peace Prize.
An hour before President Trump was set to meet with Kim for a second time, NBA veteran Dennis Rodman released a public letter to the president characterizing himself as "your Ambassador of Goodwill to North Korea."
The former NBA star, who is friends with Kim, said the North Korean leader and Trump are "on the cusp of a big, beautiful deal. One that would make you [Trump] the front runner for a Nobel Peace Prize without question."
In the Rose Garden at the White House weeks before his trip to Hanoi, Trump suggested that Japanese Prime Minister Shinzo Abe nominated him for the Nobel Peace Prize.
“I have a very good relationship with Kim Jong-un and I've done a job,” Trump said then paused. “In fact, I think I can say this, Prime Minister Abe of Japan gave me the most beautiful copy of a letter that he sent to the people who give out a thing called the Nobel Prize. He said ‘I have nominated you or respectfully on behalf of Japan, I am asking them to give you the Nobel Peace Prize.’ I said thank you.”
“Prime Minister Abe gave me – I mean it's the most beautiful five letter, five-page letter. Nobel Prize, he sent it to them. Do you know why? Because he had rocket ships and he had missiles flying over Japan and they had alarms going off you aw that,” Trump said. “Now all of a sudden they feel good, they feel safe. I did that and it was a very tough dialogue at the beginning, fire and fury, total annihilation. My button is bigger than yours and my button works. Remember that? You don't remember that and people said Trump is crazy and you know what it ended up being? A very good relationship.”
The statement set off a flurry of questions in Tokyo for Abe, but the prime minister, who has a close diplomatic relationship with Trump and has even golfed with him in Florida, demurred.
"Regarding the Nobel Peace Prize, the Nobel Committee stipulates that it will not disclose the names of nominators and the nominees for 50 years. Hence I refrain from commenting, based on this policy," Abe said.
Japanese newspaper Asahi Shimbun reported Abe wrote a letter of recommendation for Trump to receive the prize, but it was after the U.S. government "informally" made the request.
The White House did not offer comment.
It is unclear whether South Korean president Moon Jae-In, who publicly endorsed Trump for the prize, also submitted a nomination ahead of the summit. The deadline for nominations, which will be announced on October 11, were due January 31.
Two Norweigan lawmakers Per-Willy Amundsen and Christian Tybring-Gjedde say they made a submission following June’s Singapore summit.
It’s not just the president who is playing up the possibility of a Nobel Prize. North Korean state media has been pushing propaganda across the hermetic communist state that Kim Jong-Un is a frontrunner to win, according to Radio Free Asia.
“Authorities began distributing ‘educational materials for the greatness of our highest leader.’ [Within those materials] is a lot of propaganda about the Nobel prize,” an official told Radio Free Asia.
“The authorities claim that the world has our Supreme Leader as a potential winner, but they don’t really talk much about who Nobel was, how the prize was founded and what the criteria are for winning the prize,” the official said.
The president has publicly mused about the Nobel Peace Prize before and frequently knocked President Barack Obama for his win in 2009.
“They gave it to Obama; he didn't even know what he got it for. He was there for about 15 seconds and he got the Nobel Prize, he said what did I get it for? With me, I probably will never get it,” Trump said.
Trump credits his unusual diplomatic skills and tough dialogue for breaking through to the young, reclusive Communist dictator.
With the backdrop of Vietnam for the Trump-Kim summit, the potential for the Nobel Peace Prize carries historic weight. Henry Kissinger and Le Duc Tho shared the award in 1973 for negotiating the Vietnam cease-fire – but it didn’t last long. The award was met by international outcry and Tho declined to accept the award until “peace is truly established.”