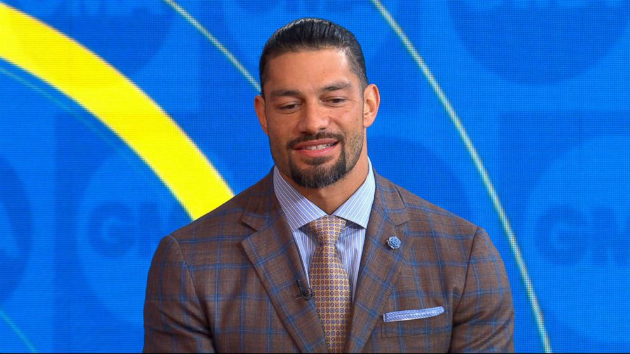 ABC News(NEW YORK) — Hours after making a huge announcement on WWE's Raw, wrestling star Roman Reigns appeared on ABC News' Good Morning America to talk about the amazing news that his cancer is in remission.
Reigns told the millions of WWE fans Monday night that the "Big Dog" was back and that he got the good news from his doctors. He had revealed his leukemia had returned late last year after having been in remission for more than a decade.
On GMA Tuesday, the wrestling champ, birth name Leati Anoa'i, said Monday night was "one of those things I thought about over and over."
He added, "This journey not going to be complete until I step back in that ring … I was so nervous last night."
The champ added that the love and support he's received this year from people from all walks of life has been "really overwhelming."
"Everybody was thinking about me," he told ABC's Robin Roberts. "I feel so blessed to receive that type of attention, that type of love."
He also touched on how sometimes families suffer the most when someone is sick.
"They are the ones worrying to death, my mom bless her heart, she is the biggest worry wart in the world," he said with a laugh, then telling his mother he loved her. "The first time it felt like I was on an island. This time it just felt like I was surrounded by guardian angels."
Reigns now wants to use his cancer battle to "create awareness" and be "a symbol of hope."
After telling his fans Monday night about his good news, Reigns told WWE he had thought about for a long time how his return would go and what he would say.
He admitted how nervous and choked up he was that "I just hope it came off well."
"I hope they can tell, 'Yeah, he is much better. He's doing better, he's moving better, he is better,'" he added.
Reigns is a four-time world champion and has been a star in the WWE since the early 2010's.