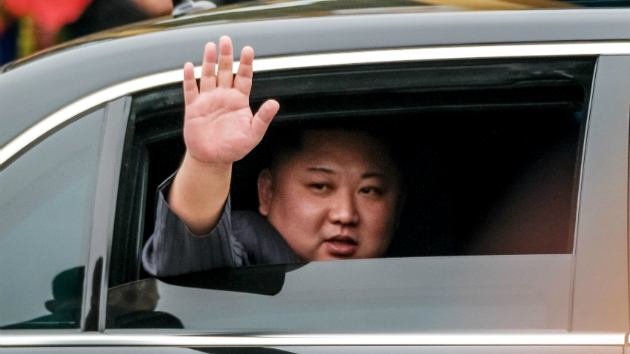 Linh Pham/Getty Images(HANOI, Vietnam) — President Donald Trump had yet to touch down in Vietnam for his second meeting with North Korea's dictator, but Kim Jong Un already scored a point against the United States at the expense of the free press.
The White House press corps was abruptly booted from its hotel workspace in Vietnam Tuesday as another high-profile guest checked in: Kim himself.
It had been rumored in recent days that Kim, in an extraordinary coincidence, would also be staying at the same hotel that the White House had also booked as the workplace for the American press.
The workspace setup included multiple camera positions for around-the-clock live TV reports, a large ballroom with rows of tables and chairs and a podium set-up, complete with American flags, for any potential briefings that the White House may wish to hold. The White House advance team and TV press representatives had been on the ground for days, pouring thousands of dollars into a setup that will no longer be used.
As White House reporters checked into the luxury Melia hotel in downtown Hanoi, they were greeted with notes in their rooms explaining that extra security protocols would be in place to accommodate the visit of a head of state also staying there.
And by the time the North Korean leader's mud-encrusted motorcade arrived at the hotel, following a more than 100-mile car ride that came after a nearly 3,000-mile-long ride on an armored train, the American press corps had been notified that its filing center was being uprooted and relocated to an international filing center.
The official notice came in the form of a tweet from the Vietnamese government, complete with speakerphone emojis.
The streets around the Melia hotel had been shut to traffic for hours ahead of Kim's arrival. As the motorcade drew near, the hotel was put on lockdown, and operations of the elevators were temporarily discontinued.
White House reporters who were outside the hotel were not allowed back inside and were instructed not to use their phones to record any video of the North Korean leader's arrival. Reporters inside the lobby were also pushed back, with Bloomberg's Margaret Talev reporting that the blinds were pulled down and a red carpet was rolled out through the lobby of the hotel.
While the White House press corps filing center has been shuttered at the hotel, American reporters have been allowed to continue their stay there as guests.
The White House declined to comment for this story.