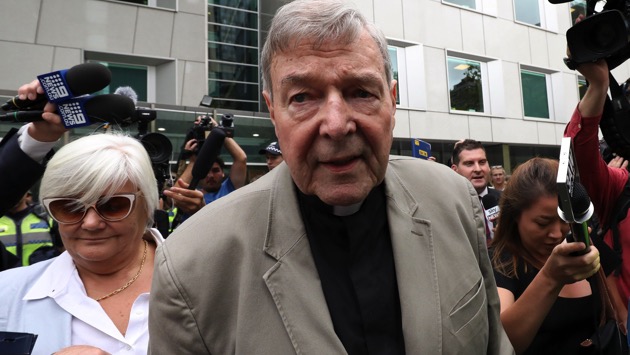 Asanka Brendon Ratnayake / AFP(NEW YORK) — The revelation that a Catholic cardinal in Australia was convicted of molesting boys marks the most senior member of the church to face prison time for sexual abuse.
The charges against Cardinal George Pell — who was not only a major figure in Australia's Catholic church but also a close adviser to Pope Francis — were not publicly released until Tuesday because of a law in the country's court system.
In December, he was convicted of molesting two choir boys in the 1990s, but under Australian law, all details of that trial — including the fact that the trial was held at all — were suppressed because Pell was set to be subject to a second trial.
Pell's lawyer Paul Galbally said that Pell maintains his innocence and that an appeal on the conviction has already been filed.
The Australian Broadcasting Company reports that the allegations brought forth in the first trial stemmed from incidents that took place when he was the archbishop of Melbourne, the country's second-most populous city.
The judge in Pell's trial ruled that the jury in the second trial, which was planned to commence relatively quickly after the first trial, would likely be influenced by the verdict in the first trial and therefore any details about the first trial were suppressed.
Pell's case is surfacing at a turbulent time for the Catholic Church. There are now at least 17 investigations into clerical sexual abuse in various jurisdictions in the U.S., and the Vatican just held a first-of-its-kind summit to address the epidemic abuse of minors by Catholic clergy.
The summit concluded Sunday, just two days before Pell's conviction became public.
To some, the summit fell short. The Survivors Network of those Abused by Priests (SNAP), the country's oldest and largest support group for survivors of clergy abuse, released a statement saying that they were "left disappointed" by the summit.
"At the end, Pope Francis offered only words, “reflection points,” and policies to consider for the future," the SNAP statement reads. "No bishop who had been involved in covering-up or minimizing allegations was fired. No directive was handed down to order bishops to turn over their secret abuse files to police."
"No punishment was agreed upon nor system put in place for disciplining those bishops who continue to cover-up abuse cases in the future. In other words, no child was made safer and no survivor was helped during this summit."
The Vatican released a statement concerning Pell through a spokesperson, a translation of which was released Tuesday, which said that the news "has shocked many people, not only in Australia."
The statement reported that Francis "confirmed the precautionary measures" against Pell, who served as the Vatican's treasurer, and that "while awaiting the definitive assessment of the facts, as is the norm, Cardinal George Pell is prohibited from exercising public ministry and from having any voluntary contact whatsoever with minors."
The reports of Pell's conviction follows soon after a former U.S. cardinal, Theodore McCarrick, was defrocked by the church over decades-old allegations of sexual abuse.
Any further action by the church against Pell will come after his criminal process in Australia is concluded.
Copyright © 2019, ABC Radio. All rights reserved.