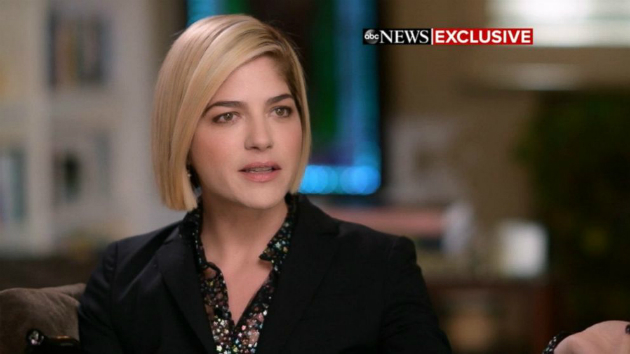 ABC News(LOS ANGELES) — Actress Selma Blair stunned on the red carpet Sunday night — with the aid of a bedazzled cane — at the Vanity Fair Oscars after-party.
The 46-year-old actress is now revealing the agony she went through before receiving a diagnosis of multiple sclerosis (MS) last August.
"Ever since my son was born, I was in an MS flare-up and didn't know, and I was giving it everything to seem normal," Blair told Robin Roberts in an interview that aired Tuesday on ABC News' Good Morning America. "And I was self-medicating when he wasn't with me. I was drinking. I was in pain. I wasn't always drinking, but there were times when I couldn't take it."
"I was really struggling with, 'How am I gonna get by in life?'" the actress recalled. "And [being] not taken seriously by doctors, just, 'Single mother, you're exhausted, financial burden, blah, blah, blah.'"
Blair recalled that she would get so fatigued prior to her diagnosis that she would need to pull over to take a nap after dropping her son, now 7, off at his school one mile away from their home.
"I was ashamed and I was doing the best I could and I was a great mother, but it was killing me," she said. "And so when I got the diagnosis I cried with some relief. Like, 'Oh, good, I'll be able to do something.'"
Diagnosis brought 'tears,' but also 'relief'
MS is a chronic, often unpredictable disease of the central nervous system and can cause problems with vision, balance and muscle control.
During her interview with GMA at her Los Angeles home, Blair was in an "exacerbation" of MS, or an attack that causes new symptoms or the worsening of existing symptoms.
The actress said she was suffering from spasmodic dysphonia, a neurological disorder affecting the voice muscles in the larynx, according to the National Institutes of Health (NIH).
"It is interesting to put it out there, to be here to say, 'This is what my particular case looks like right now,'" Blair said.
Despite dealing with a flare-up of the disease, the Cruel Intentions and Legally Blonde actress said she was doing "very well" and was happy to be able to show "what being in the middle of an aggressive form of multiple sclerosis is like."
Blair said that as she struggled with symptoms before her diagnosis, she reached out to fellow actor Michael J. Fox, who was diagnosed with Parkinson's disease in 1991, because she wondered if she too could have Parkinson's.
"I said, 'I don't know who to tell, but I am dropping things. I'm doing strange things,'" Blair said. "He got in touch with me and we began conversations. He really helped me … he gives me hope."
Blair revealed her MS diagnosis publicly last October when she posted a heartfelt message on Instagram.
"I had tears. They weren't tears of panic," Blair said about the moment she was diagnosed. "They were tears of knowing I now had to give in to a body that had loss of control, and there was some relief in that."
How she told her son about the disease
Blair also opened up about the moment she told her son about her disease.
"I always want him to feel safe, never responsible for me," she said. "But he had already seen that I was falling and doing things."
She added that she tried to keep a smile about it and was "always laughing," and that her young son would imitate her dropping things on occasion.
"So I did have to tell him after the MRI. I said, 'I have something called multiple sclerosis,'" she recalled. "And he almost cried and said, 'Will it kill you?'"
"And I said, 'No. I mean, we never know what kills us, Arthur. But this is not the doctor telling me I'm dying,'" she said. "And he was like, 'Oh, OK,' and that was it."
How she stays positive and inspired
During her most difficult days, Blair said she allows herself to get in bed and not feel guilty about it.
"I get in bed and I don't move," she said. "You just have to. You can't do it all."
"It's fine to feel really crappy and say, 'I gotta,'" Blair said. "And my son gets it and now I've learned not to feel guilty."
Blair said she is also inspired by the people around her, including her son and "three of the dearest people" who are always by her side.
"I never thought I'd have such riches and that I'd have to be so vulnerable and accepted," she said.
"It's keeping me alive, no pressure to them," she quipped. "So rude of me, but the truth is they have been."
Blair added that doctors have told her that her "prognosis is strangely amazing."
"I'm very symptomatic. I have an aggressive MS," she said. "But the doctor I saw … he said within a year I could have — at the time he said 90 percent of my abilities back."
Blair admitted that she was "a little scared of talking" during her flare-up, but that her neurologist encouraged her to speak out and "bring a lot of awareness" to the disease.
"No one has the energy to talk when they're in … flare-up," the actress said, adding, "But I do 'cause I love a camera."