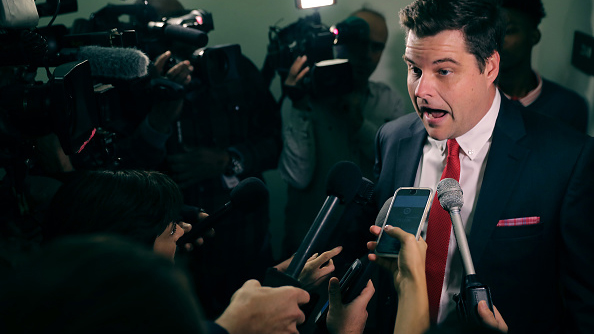 Chip Somodevilla/Getty Images(WASHINGTON) — Republican Congressman Matt Gaetz, R-Fla., implied alleged details about Michael Cohen’s romantic life could come out during President Donald Trump’s longtime fixer and personal attorney’s public congressional testimony Wednesday.
Gaetz, a self-described Trump loyalist, tweeted: “Hey @MichaelCohen212 – Do your wife & father-in-law know about your girlfriends? Maybe tonight would be a good time for that chat. I wonder if she’ll remain faithful when you’re in prison. She’s about to learn a lot…”
Gaetz was questioned by reporters moments after his tweet and why he wrote it saying “the tweet speaks for itself."
Gaetz was asked if the tweet should be perceived as a threat telling reporters, “Absolutely not. We’re witness testing not witness tampering. And when witnesses come before Congress their truthfulness and voracity ought to be tested and we have the opportunity.”
Lanny J. Davis, an attorney for Michael Cohen, said: "We will not respond to Mr. Gaetz’s despicable lies and personal smears, except to say we trust that his colleagues in the House, both Republicans and Democrats, will repudiate his words and his conduct. I also trust that his constituents will not appreciate that their congressman has set a new low — which in today’s political culture is hard to imagine as possible.”
The tweet from Gaetz was a stunning attack from a member of Congress ahead of public testimony.
“I think it’s enough to warrant an investigation. This is knowingly using intimidation … with the intent to influence or delay or prevent the testimony,” said Melanie Sloan, a former federal prosecutor, senior advisor to American Oversight, a government watchdog group referring to the federal code. “This guy could be charged with witness tampering.”
Bryson Morgan, who served as Investigative Counsel to the U.S. House of Representatives Office of Congressional Ethics from 2013 to 2015, and is now in private practice at Caplin & Drysdale, said the tweet could also prove problematic for Gaetz in Congress.
“There is certainly an argument that it violates the House ethics rules,” Gaetz said, noting rules that prohibit “conduct that does not reflect creditably on the House.”
Asked for any proof about his allegations against Cohen, Gaetz told ABC News “tune in tomorrow and find out”. Gaetz is not a member of the House Oversight Committee which will question Cohen tomorrow for his first public hearing.
Cohen has been testifying before members and staff of the Senate Intelligence Committee behind closed doors since first thing Tuesday morning.
The longtime Trump Organization employee plead guilty to lying to Congress as well as financial crimes including bank and tax fraud late last year. Cohen also pleaded guilty to campaign finance violation for payments made to adult film star Stormy Daniels during the 2016 presidential campaign.
A source familiar with his public testimony plans for Wednesday told ABC News Cohen is expected to publicly accuse President Trump of potentially committing a crime while in office. The accusation, according to the source, is related to Trump's alleged repayment of money to Cohen for his deal with Daniels. Trump has denied Daniels' claim but has admitted to the reimbursement.
Trump has denied the affair alleged by Daniels and another accusation from former Playboy model Karen McDougal, and has previously said the payment amounted to nothing more than a “simple private transaction,” and that they do not qualify as campaign finance violations.

Election 2020 live updates: Trump to campaign in Pennsylvania, Biden off the trail
NYPD officer suspended after promoting Trump on police loudspeaker
Minority communities fighting back against disinformation ahead of election
Election 2020 live updates: Trump, Biden racing toward Election Day with more rallies
Turbulent week of weather is ahead for much of the country
Trump, Biden favorability unchanged as 2020 race heads into final week: POLL