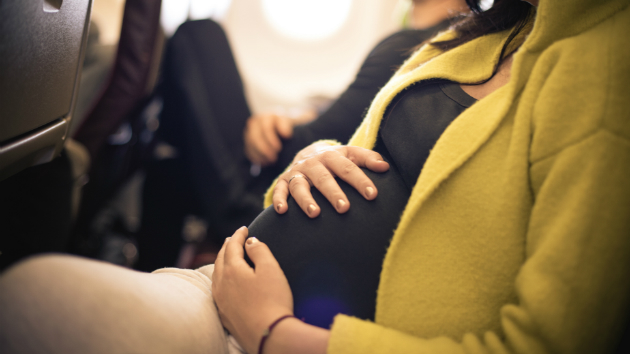 Liderina/iStock(NEW YORK) — Meghan Markle, the Duchess of Sussex, is jetting around the world as she counts down the weeks until the birth of her first child.
Meghan, 37, flew to Morocco Saturday for an official visit on behalf of the royal family with Prince Harry.
She just returned to London last week from New York City, where she enjoyed a five-night stay catching up with friends and being feted at a baby shower.
A one-way flight to Morocco is around three hours from the U.K., while a one-way trip from New York to London takes approximately eight hours.
That adds up to a lot of time in the air for Meghan, who told well-wishers last month that she is due in April.
Flying in the third trimester of pregnancy may not matter for a royal like Meghan, who has the availability to travel on a private plane and with her own medical team.
For other women who are pregnant, however, traveling after 28 weeks is not advised, according to Dr. Jennifer Ashton, ABC News chief medical correspondent and a practicing OB-GYN.
"I tell my patients that once they’re in the third trimester, travel anywhere more than one to two hours more from their hometown is ill-advised, unless they have no problem having their baby in a different location with a different doctor," Ashton said.
When it comes to flying, pregnant women are already at an increased risk of developing blood clots; any flight of eight hours or longer only increases that risk, Ashton said.
The primary reason pregnant women are warned against travel in the final weeks before birth, though, is more about logistics and care than medical complications from flying, she added.
"You have to remember that medical emergencies and accidents can happen, and then you’re away from your obstetrician and your hometown and it becomes logistically complicated," said Ashton. "If a pregnant woman goes somewhere at 30 weeks and they wind up delivering in that city, then they may have to spend two months in that city because their baby is in the NICU."
The American College of Obstetricians and Gynecologists (ACOG) advises that healthy, pregnant women can travel safely until they are 36 weeks pregnant, with the ideal time to travel coming between week 14 and week 28 of pregnancy.
Meghan, whose pregnancy at age 37 makes her of "advanced maternal age," according to the ACOG, flew to Australia, New Zealand, Tonga and Fiji with Prince Harry in October, just after her pregnancy was made public.
Pregnant women who fly commercially have to take into consideration restrictions and requirements from airlines, which each have their own set of rules.
Delta Airlines, for example, does not place any restrictions on pregnant women and does not require a medical certificate to travel.
American Airlines does not allow pregnant women to fly on domestic flights under five hours within seven days before and after their delivery date. If a pregnant woman's due date is within four weeks of her flight, she must provide a doctor’s certificate stating she has been recently examined and is "fit to fly."
"There is medical jeopardy for the woman and her baby if something happens in the air," Ashton explained. "It also puts a lot of liability on the airline and they may have to make an emergency landing."
For pregnant women like Meghan who do travel while they're expecting — whether it's for work, for fun or out of necessity — ACOG recommends they take the six steps below before their journey.
Experts also recommend that pregnant women bring a written list or program into their cellphone contact information for their OB-GYN and primary care physician and check where nearby hospitals and urgent care sites are at their vacation destination.
1. Schedule a checkup with your obstetrician–gynecologist (ob-gyn) before you leave.

2. Know your estimated due date. If you have a problem while you are traveling, your caregivers will need to know how far along you are in your pregnancy.

3. Plan to bring any over-the-counter medications you may need, such as pain relievers, hemorrhoid ointment, a first aid kit and prenatal vitamins. Also bring any prescribed medications.

4. Check that you are up to date with your vaccines.

5. Think about how long it will take to get to your final destination. The fastest way often is the best.