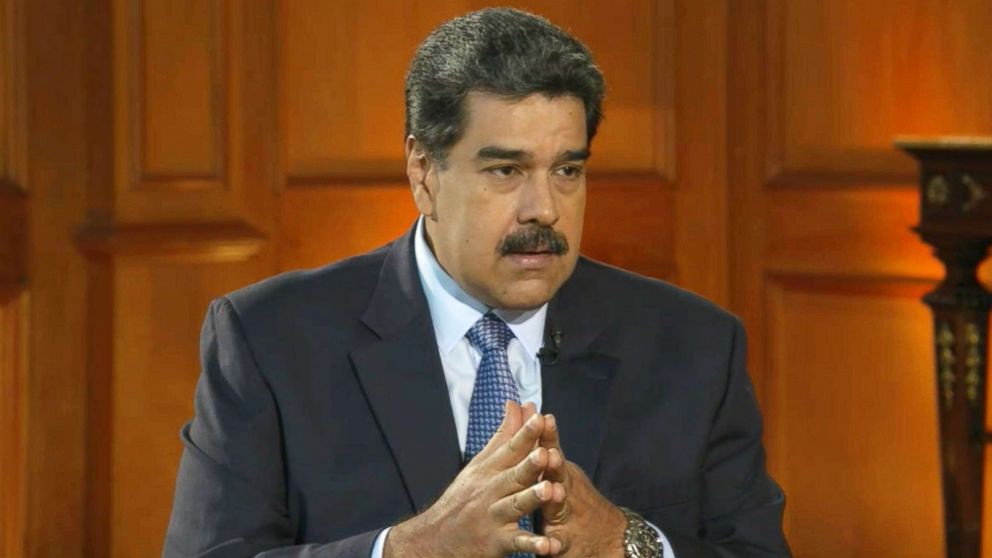 ABC News(CARACAS, Venezuela) — Embattled Venezuelan President Nicolas Maduro accused the U.S. government of trying to fabricate a crisis to start a war in South America in his first interview with an American television network in years.
"Everything that the United States government has done has been doomed to failure," Maduro told ABC News' Tom Llamas in Spanish from the presidential palace in Caracas. "They are trying to fabricate a crisis to justify political escalation and a military intervention in Venezuela to bring a war to South America."

U.S. Vice President Mike Pence traveled to Colombia Monday morning to deliver a message from President Donald Trump to Venezuelan opposition leader Juan Guaido: "We are with you 100 percent." There, he announced that the U.S. will provide an additional $56 million in aid to Venezuelan citizens and that the U.S. Treasury Department would be imposing "stronger sanctions" on the Maduro regime's "corrupt financial networks."
Maduro said that the meeting in Bogota was "part of that politics to attempt to establish a parallel government in Venezuela." He added that the U.S. "wants Venezuela's oil" and is "willing to go to war for that oil."
"The extremist Ku Klux Klan government that Donald Trump directs wants a war over oil, and more than just oil", he said, describing Venezuela as a "pacifist, humble nation."
Asked if he had a message for Trump, Maduro said he needs to "fix your policy over Venezuela."
"Venezuela has the right to peace, Venezuela has legitimate institutions. I, as President of Venezuela, am prepared for a direct dialogue with your government and with you to look for, like the Americans that we are. We are South Americans, you are North Americans. To look for 21st century solutions not Cold War solutions. The Cold War should stay behind," Maduro said.
"We cannot this war of are you a communist, are you anti-communist, inter-communist, anti-communist – that is not of this century. We are Democrats that believe in a new type of socialism and we have the right to the diversity of criterion and ideology. And so President Trump should always be ready to see Venezuela’s truth – the other side of the coin and rectify and start a new path," Maduro continued.
"The path that got you here is the fractured path that Barack Obama left behind, President Trump. It’s a path of a coup d’etat, of an intervention – that is not of the 21st century – I say to you, rectify. You will always have in me someone that is prepared – with our differences between us – to extend my hand and talk about a peaceful dialogue," he added.
Around 50 countries no longer recognize Maduro as Venezuela's president and have announced that they view Guaido as the country's legitimate leader.
When asked if he would allow opposition Venezuela leader Juan Guaido back into the country, Maduro said. "He can leave and come back and will have to see the face of justice because justice had prohibited him from him leaving the country."
"He has to respect the laws," Maduro said.
When confronted with claims from the United Nations and human rights groups that estimate hundreds have died because of his administration, Maduro accused Llamas of lying "just like Trump."
"No human rights organizations has made me responsible for any deaths. You are lying Thomas. Do not lie – you are just like Trump. You are just like Trump," Maduro told Llamas, who responded that he had the U.N. report that includes the allegations that hundreds have died as a result of Maduro's administration.
"Does it make me, Nicolas Maduro, responsible of assassinating people?" Maduro asked.
When Llamas reminded Maduro that it's his government, Maduro again accused him of lying: "You have committed an error as a journalist."
"What I can tell you is that in Venezuela that is free expression for political opposition mobilizations. They have groups that attack public forces and that is what we put up with in 2016. Groups of delinquents that have been tried and processed according to Venezuelan law. What I can also tell you is that in Venezuela there is full freedom of political expression, of opinion, free press. In Venezuela there is full freedom to hold public office," Maduro said.
"In Venezuela there is a democracy with a lot of potential, with a lot of force. And it cannot be neglected and ignored that this constitution is the first constitution in the history of our country that was approved by referendum and has been full force and is in force today in Venezuela," he added.

Maduro told Llamas not to believe critics who say he's run out of chess moves, adding that the country "has all the economic capacity to get ahead and we will in this year, 2019."
"Venezuela has a constitution that is defended by all its institutions. It is legitimate and powerful state. And Venezuela has extraordinary relations – we are the president of the Organization of Non-Aligned States that groups 120 countries. We are the president of Organization of the Petroleum Exporting Countries this year. We have grand responsibilities around the world that we will continue to fulfill," Maduro said.
"So that checkmate scheme, Mike Pence can believe that. Mike Pompeo can believe that. John Bolton and Elliott Abrams can believe that. But you should not believe that because you are a young man and knows that history will continue," he added.

Last Thursday, Maduro closed Venezuela's border to Brazil ahead of opposition plans to bring in humanitarian aid despite Guadio's objection.
Maduro blocked a convoy carrying American humanitarian aid that arrived at the Colombia-Venezuela border earlier this month. He has blocked aid from entering the country for years.
Trump, Venezuela's opposition and Guaido have put pressure on Maduro to let the aid in. Venezuela's military has so far largely stood by the embattled president, who refuses to leave power.
Pence met with Guaido as well as Colombian President Ivan Duque Marquez in Bogota Monday before he addressed the Lima Group on the ongoing humanitarian crisis in Venezuela.
"President Duque we are grateful for your stand for freedom," Pence said. "President Guaido, we admire your courage and the courage of the other opposition leaders."
Trump warned Venezuela's military last week that standing by Maduro could make them "lose everything" and in a speech Monday to the country's exiled community in South Florida, called Maduro "a Cuban puppet."
Guadio also spoke from Bogota Thursday, saying the world saw the real Venezuela on Saturday during the violence that occurred as the opposition tried to force humanitarian aid into the country.
"And the world saw within hours on Saturday what Venezuela has lived with for years: the destruction of the production, the burning of food, the burning of medicine that could save lives," Guaido said.
He added: "We must insist with the attention to the humanitarian emergency, to protect our people and of course we are in Bogota today thankful for the invitation that today formally incorporates into the Lima Group."
Maduro said Thursday in televised comments that he was considering closing the Colombia border, saying the stockpiling of aid in Cucuta was a "provocation" and a cheap show by the opposition to undermine his government.
Dueling aid concerts took place over the weekend on either side of the Venezuelan border. Maduro announced that his administration would be hosting its own two-day concert at the Simón Bolívar International Bridge on Friday and Saturday after billionaire Richard Branson, a critic of the Maduro regime, announced that he would be sponsoring a Live Aid-style benefit concert in Cucuta.