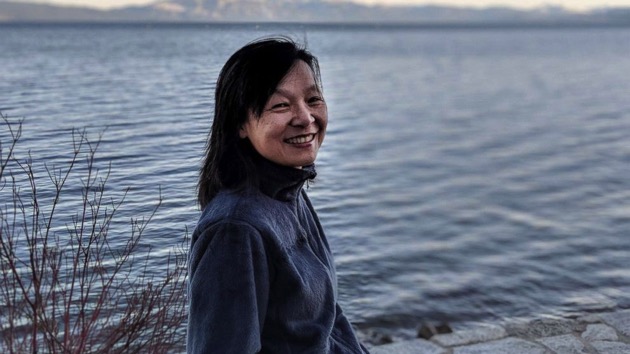 Courtesy Dylan Qian(YOSEMITE NATIONAL PARK, Calif.) — A California outdoors enthusiast killed by falling rocks and ice at Yosemite National Park this week became the second hiker in two months to die on Mist Trail, a steep, 3-mile path that has been closed to the public since a Los Angeles man died there on Christmas Day after slipping and tumbling down a granite slope into a river.
Xuan Wang, 56, of Cupertino was killed Sunday while hiking with a friend on the closed trail, the National Park Service said in a statement.
"She loved the outdoors and passed away doing what she loved," Wang's son, Dylan Qian, said in a statement on Tuesday to ABC News.
He said his mother worked as a software engineer for LinkedIn, the online professional networking site.
"Xuan was a beloved daughter, wife, colleague, aunt, friend, and mom," Qian's statement reads. "She's had a positive impact on everyone she has touched, and her love will be felt long after she is gone."
Wang was killed about 12:30 p.m. on Sunday as she and a friend were hiking on the Mist Trail, a steep 3-mile path leading from Yosemite Valley to Vernal Fall, according to the National Park Service statement.
"The trail closure is clearly marked and there is a gate on the trail reminding visitors of the closure," the Park Service statement reads. "Wang ignored the signs, went around the gate and the incident happened on the trail leading to Vernal Fall."
Qian said he and his family are investigating the circumstances surrounding his mother's death.
"She has always been a very careful and thorough person and it is extremely out of character for her to actively cross onto a closed area," Qian said.
The Mist Trail was closed on Jan. 5 after 32-year-old Joshua Conner of Los Angeles was killed on Christmas Day while hiking in the area near Vernal Fall. Park officials said Conner apparently slipped and tumbled down a granite slop into the Merced River.
Officials said the Mist trail is usually closed in the winter to visitors due to the hazardous icy condition.
Copyright © 2019, ABC Radio. All rights reserved.