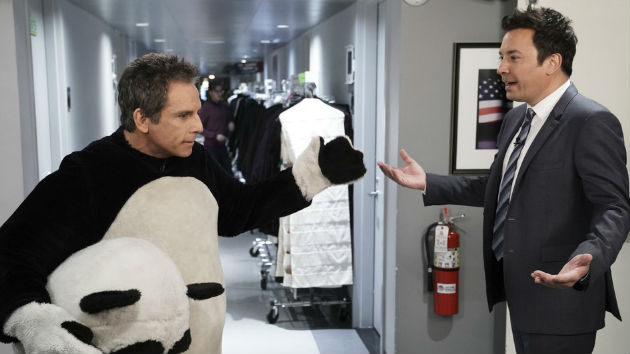 The 1990s series, which provided a behind-the-scenes look at what happens behind the scenes of a fictional late-night talk show, featured Shandling as Sanders and actual celebrities appearing as themselves.

Some of Monday's highlights:

Ben Stiller, who previously made a surprise cameo appearance as "Hashtag the Dancing Panda" — one of Fallon's recurring bits — planning to reprise the role in a surprise walk-on. The surprise is blown when Jimmy bumps into Stiller backstage before the show but he convinces him to go ahead with the bit anyway, telling Stiller he'll act surprised. When it's over, Stiller tells Fallon he "can't act" and storms off.

Tina Fey, promoting her upcoming Netflix film Wine Country, is Fallon's first guest. She makes it clear that — for reasons unbeknownst to Jimmy — she's mad had him. As a trailer for her movie plays in the background, she tells him that in the future she'll be, "shopping my wares elsewhere."

"You got Trump elected," she quips, as she heads backstage — a reference to Trump's September, 2016 appearance on The Tonight Show when Fallon mussed Trump's hair, which drew criticism from some for Fallon "humanizing" the soon-to-be president.

Fifteen-year-old animal expert Robert Irwin stops by, whom Fallon blames for a cockroach infestation at 30 Rock after he pulled out several of the creepy crawlers out during his last Tonight Show appearance.

Robert De Niro also makes an appearance, supposedly recording a promo to congratulate Jimmy on his fifth anniversary. However, after spotting several cockroaches, he leaves the set echoing Fey's line, "I'll be shopping my wares somewhere else."