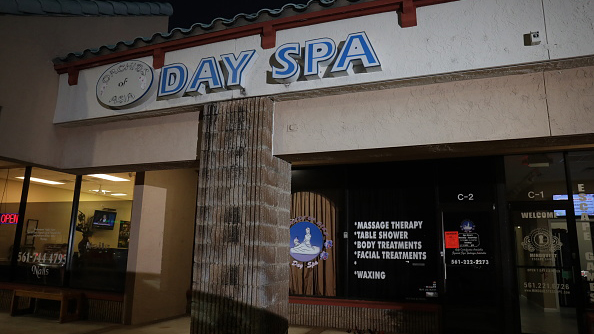 Barry Chin/The Boston Globe via Getty Images(NEW YORK) — The recent reports of several high-profile men being among the lists of hundreds of massage parlor patrons set to face prostitution charges in Florida may draw attention to and lead to more insights about the dark underbelly of human trafficking that police said may have happened alongside it.
The fact that the alleged crimes took place in South Florida spas is contributing to the misunderstandings and mischaracterizations that some advocates see people attaching to online talk about the investigations.
"A lot of times when we think of prostitution, we are thinking of women and girls standing on street corners, and we think of the movies where we think of pimps who are violent … [but that's different than] when we think of [sex acts being performed in] massage parlors, because it's made to seem like this very mellow environment," said Vicky Basra, the senior vice president of the non-profit Dolores Barr Weaver Policy Center, which has an anti-human trafficking program.
"What we don't realize is that the violence in those environments looks very different," she said, "and so we consider it a victimless crime because the violence in that situation looks very different."
Basra noted that in such massage parlor situations, often the women aren't paid, they may face the threat of deportation and they may have their family in their home country threatened with physical violence.
"While we may not know if there was physical violence occurring, there was emotional and mental violence that was occurring, but then again the physical violence of sexual rape — that was happening every single day," Basra said. "These women did not come into this country thinking they were going to be raped every single day."
Bradley Myles, the CEO of Polaris, a nonprofit organization dedicated to combating human trafficking who also operates the National Human Trafficking Hotline, said that there are "pervasive myths and misunderstandings about" massage parlors that are involved with human trafficking and sex acts.
"I think people try to sanitize and minimalize what really happens there," he said, adding that people make light of those situations by joking about them. Myles said that what happens inside the massage parlors can range from manual masturbation to full, unprotected intercourse.
Myles said that many of the women who work at such massage parlors are tricked into working there, often coming from abroad after being lured with the promise of lucrative jobs as maids or in restaurants. Upon arrival, they find themselves in a "very untenable financial structure" which includes steep fees — including for transportation but also food, room and board, and, in some cases, even toilet paper.
"These are subtle artful cunning traffickers, so much so that sometimes they convince people that women are there as consensual people in the sex trade," Myles said.
Myles said that in many such parlors, the women receive no hourly wage or wage per service, but rely on tips — if they get them — which are then often split between the spa workers, to pay off the mounting debts.
Jessica Melton, the chief of the human trafficking unit at the Queens County District Attorney's office, said that the fee structures are similar in some New York-based massage parlors.
"They're put in a position that they now have to work off this debt," Melton said. "It's insurmountable."
In the Florida case, Martin County Sheriff William Snyder said that "it was clear that multiple women were working and living inside the spas."
"They were cooking on the back steps of the business," Snyder said at a news conference Thursday. "They were sleeping in the massage parlor, on the massage tables. They had no access to transportation. They were moved from location to location. They were averaging eight clients a day, and if you do the math that's approximately 1,500 men a year, with no days off."
Palm Beach County State Attorney Dave Aronberg said Monday that the women involved in the sex acts "are themselves victims … lured into this country with promises of a better life only to be forced to live and work in a sweatshop or a brothel performing sex acts for strangers."
"It's about time the country has a real conversation about human trafficking which is modern-day slavery in our midst," Aronberg said. "This is not about lonely old men or victimless crimes. This is about enabling a network of criminals to traffic women into our country for forced labor and sex."