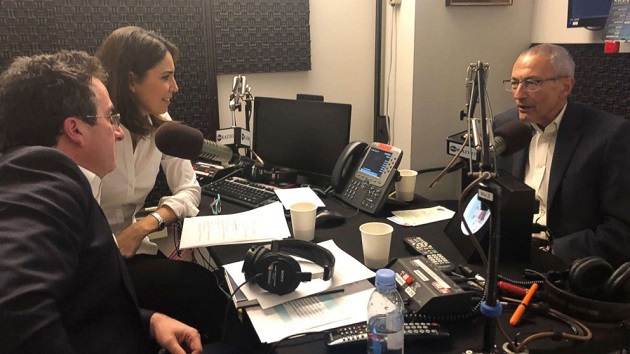 ABC News(WASHINGTON) — Hillary Clinton’s former campaign chairman John Podesta still harbors strong emotions about Roger Stone, the Republican dirty-trickster he believes played a role in releasing his hacked personal emails to try and gain an edge in the final month of the 2016 presidential contest.
“I think Roger Stone's on his way to prison, quite frankly,” Podesta told ABC News — as Stone awaits trial on allegations he lied about his indirect communications with WikiLeaks, the organization that blasted his hacked emails into cyberspace.
“I think at the end of the day, he can strut and he can do his Nixon impressions," Podesta concluded. "But, maybe when the cell door clanks, he'll feel a little bit more remorse.”

Mandy Moore says she was shut out of an interview because she refused to talk about her abuser
See Emma Stone transform into a Disney villain in first ‘Cruella’ trailer
Texas city forced to shut off water due to winter storm
Oliver Stone and Spike Lee share thoughts on ‘Da 5 Bloods’ and the “heroic” Chadwick Boseman
Rupert Grint thinks HBO Max’s rumored Harry Potter series would be “weird”
Report: Dustin Diamond undergoes first round of chemo, diagnosed with stage 4 small cell carcinoma