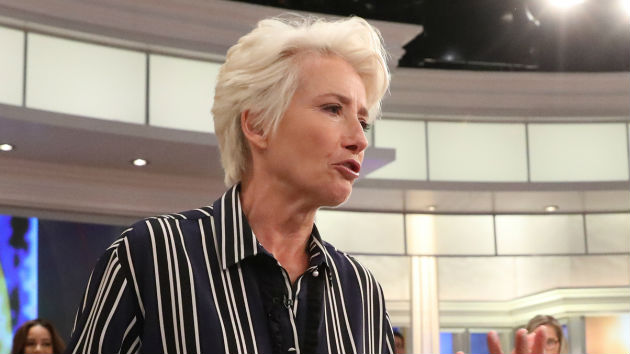 Photo by Heidi Gutman/ABC via Getty Images
Posted on February 26, 2019 by ABC News

Photo by Heidi Gutman/ABC via Getty Images(LOS ANGELES) — Emma Thompson's decision to quit the Skydance Animation film Luck — which is being produced by embattled former Pixar and Walt Disney Animation head John Lasseter — has everything to do with him.

Lasseter was a part of the blockbuster-minting machine behind the Toy Story, Cars, and Incredibles films, but the Oscar-winning producer's career with ABC News' parent company came to a messy end due to accusations of sexual misconduct. Lasseter admitted to "inappropriate hugging" and "other missteps."

Lasseter was recently scooped up by Skydance Media Chief Executive David Ellison, in an effort to get the company off the ground, but the takeoff has been less than smooth. Following a series of apologies for past behavior to his new co-workers, Lasseter was slammed on social media.

Now, Thompson has written a letter to Skydance, explaining her decision to leave Luck, and putting the blame squarely on Lasseter.

"If a man has been touching women inappropriately for decades, why would a woman want to work for him if the only reason he's not touching them inappropriately now is that it says in his contract that he must behave 'professionally'?" she asked.

The multiple Oscar winner added, "I am well aware that centuries of entitlement to women's bodies whether they like it or not is not going to change overnight…But I am also aware that if people…do not take this sort of a stand, then things are very unlikely to change at anything like the pace required to protect my daughter’s generation."